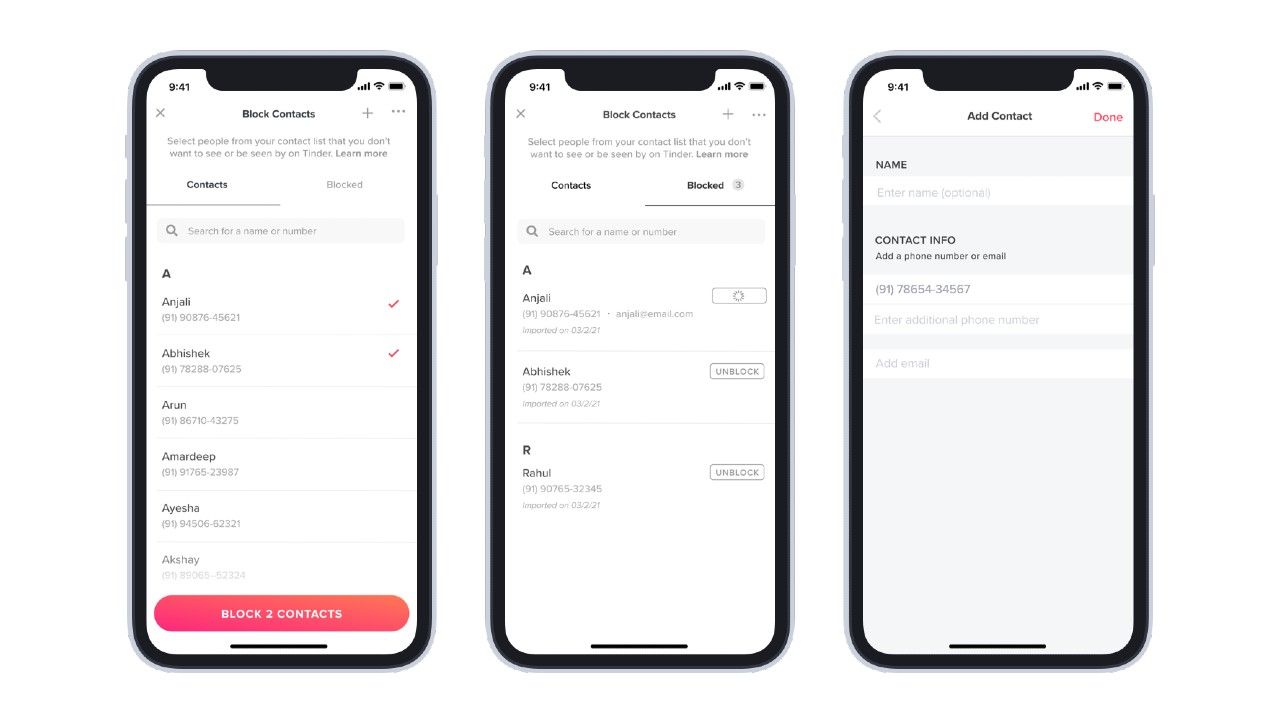 
Tinder has announced a new feature called Block Contacts that gives users the option of blocking the chance of pairing up with a contact. This could be an ex, a cousin or a colleague. Blocked contacts won’t be notified you blocked them, and blocking contacts doesn’t affect your existing matches or messages.

Read the complete press release below

Whether it’s a former flame, a cousin, or a colleague, just about everyone has a personal connection they’d rather not run into when dipping their toe in the dating pool. In fact, a recent survey commissioned by Tinder found that more than 40% of respondents have come across an ex-partner on a dating app. Another 24% have seen a family member or colleague, and one in ten have even encountered their professor’s profile. Awkward. Given the chance, 78% of those surveyed would prefer to not see, or be seen by, these connections on an app. With this in mind, Tinder is rolling out a new feature that allows members to block personal contacts in the app, empowering them to confidently Like their way to sparking new connections while avoiding the awkwardness of a familiar face they would rather not see.

The new Block Contacts feature, which gives members more control over their experience, is launching just in time to help consumers navigate this year’s wave of springtime uncouplings. Known as “Uncuffing Season,” the annual onset of warmer weather compels hibernating couples to cut ties just in time to enjoy an unattached summer season. The notion of uncuffing isn’t a new phenomenon either, 63% of survey respondents agree summertime is the best time to be single. However, the prospect of a somewhat normal post-pandemic summer has inspired 2021’s “Great Uncuffing.” So much so that the same study found that more than 40% of those surveyed would consider breaking things off with a partner ahead of summertime, and over half of its Gen Z respondents had already bid farewell to their pandemic partners this year.

“We may not be able to save you from awkward run-ins at the coffee shop, but we are giving you more control over your experience on Tinder,” said Bernadette Morgan, Group Product Manager, Trust & Safety at Tinder. “We’re rolling out Block Contacts as an additional resource empowering members with peace of mind by helping create a worry-free space for them to spark new connections.”

Members everywhere will be able to access Block Contacts within their profile settings. From there, they can input which of their contacts they’d rather not see, or not be seen by, on Tinder. Whether those contacts are already on Tinder or decide to download it later using the same contact info, they won’t appear as a potential match. Initially tested in India, Korea and Japan, members who adopted the Block Contacts feature on Tinder added about a dozen contacts to their block list.

Block Contacts is a simple, settings-like feature. There are two ways to use it:

Scroll down and select “Block Contacts”

If you’d rather not upload all your contacts to Tinder, or if you want to block someone who isn’t saved in your contact list, you can manually add their contact info:

Then, tap the + icon at the top of the screen

Blocked contacts won’t be notified you blocked them, and blocking contacts doesn’t affect your existing matches or messages.