The only NAS you’ll ever need 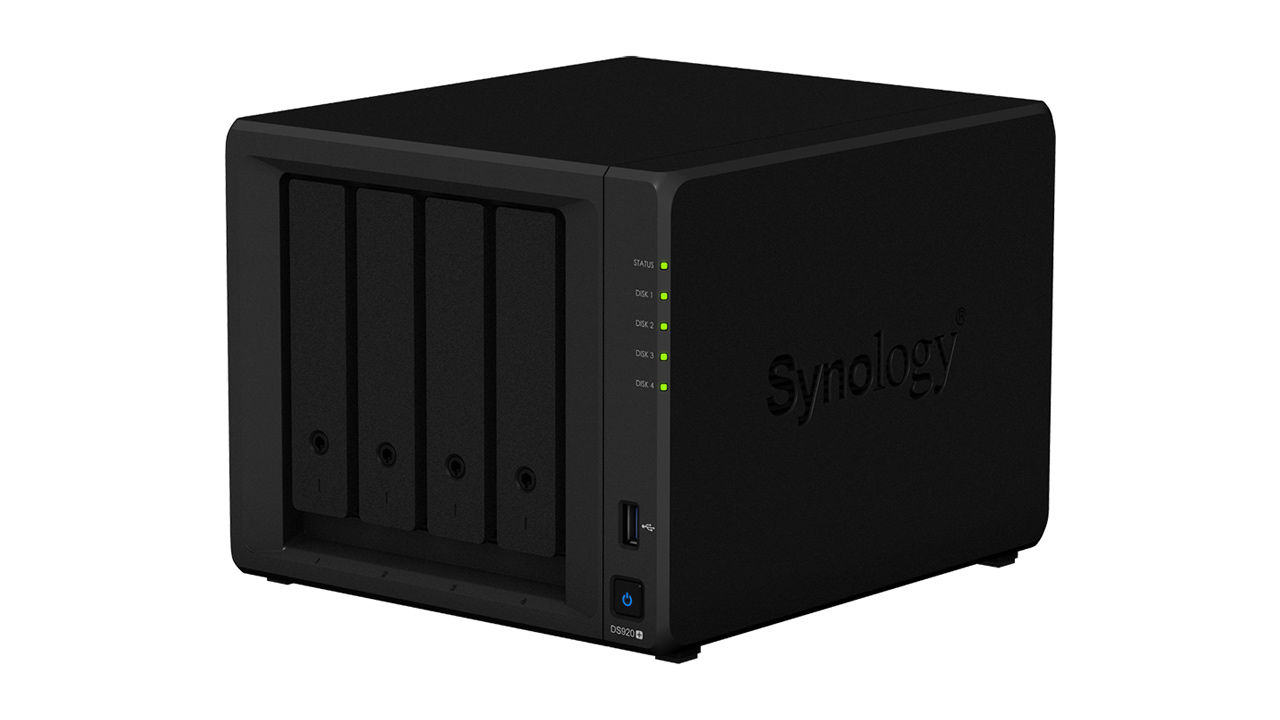 
The Synology DiskStation DS920+ is a direct upgrade to the DS918+ that won the Zero1 award last year. It was the top-of-the-line NAS for home consumers from Synology that comes laden with features that make file management seem like child’s play. With the DS920+, Synology is also bringing forth a few key improvements to the hardware to bring it to more current standards. Let’s take a look at all that they’ve packed in.

The DS920+ comes with a power adapter, power cable, tray lock key, user manual, screws for mounting 2.5-inch drives and two Gigabit Ethernet cables in the box. This is a diskless SKU so you have to procure the hard drives separately. Synology provides a list of all the compatible drives on their website so always refer to that when buying hard drives and SSDs for the DS920+ or any Synology NAS for that matter. As for what lies under the hood, here are the specifications.

We’ve always maintained that Synology’s NAS operating system, DSM is the most feature rich OS that we’ve ever tested. The DS920+ currently runs DSM 6.2.3 which is the latest that Synology has to offer. DSM 7.0 is currently in Beta and folks who opted in for the Beta earlier this year can experience the same but we went with the stable 6.2.3 for all our tests. Compared to the DS918+, the DS920+ has a better processor and faster RAM which allows users to run more applications and have them be responsive.

We tested out the webserver feature and installed a WordPress instance on the drive with ease. We didn’t populate the WordPress database with a lot of posts and images. and plugins, so we don’t know if the DS920+ can handle a mid-sized web site but for personal portfolio websites or just plain experimentation, the hardware is more than enough. Of course, you can add more RAM to the DS920+ and therefore increase the ability to host more plugins on your WordPress installation. 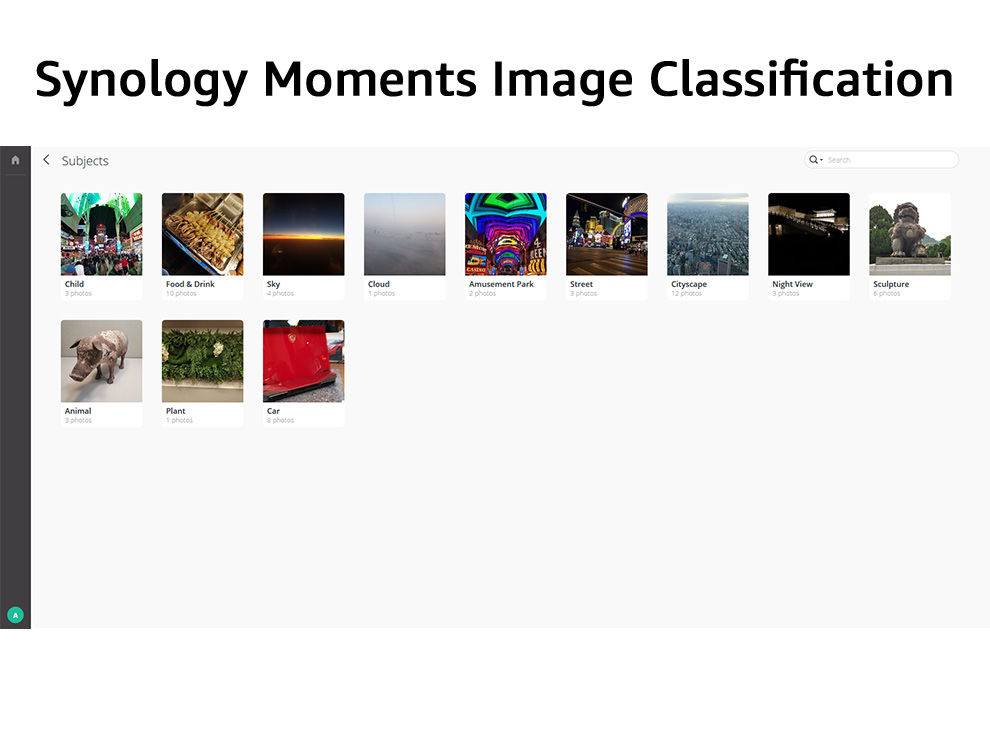 The other nifty app that we tested was Synology Moments. It’s basically a photo and video organisation app with new AI auto-tagging features which can group your photos in a similar fashion to what Google does with Google Photos. In fact, we took two massive albums spanning 18 GB of photos and videos with all the EXIF metadata intact and fed it to the Synology Moments app. Right off the bat, it started grouping photos into themed buckets. We saw people, animals, places, children, plants, skylines and cityscapes being organised into their individual folders. The app wasn’t perfect but it does come very close and the inference engine needs a little bit more work. With DSM 7, Synology is revamping the Moments app as Synology Photos and will feature a much improved AI image classification engine.

The Synology DS920+ is a 4-bay NAS with a similar construction as the DS918+. In fact, it’s lighter by a few grams. The DS920+ has the same as the internal chassis and the mainboard mount are the only metallic components and the rest of the unit is made up of plastic. The locking mechanisms and the HDD trays are still the same and there’s no need to change things up here since everything works just fine. 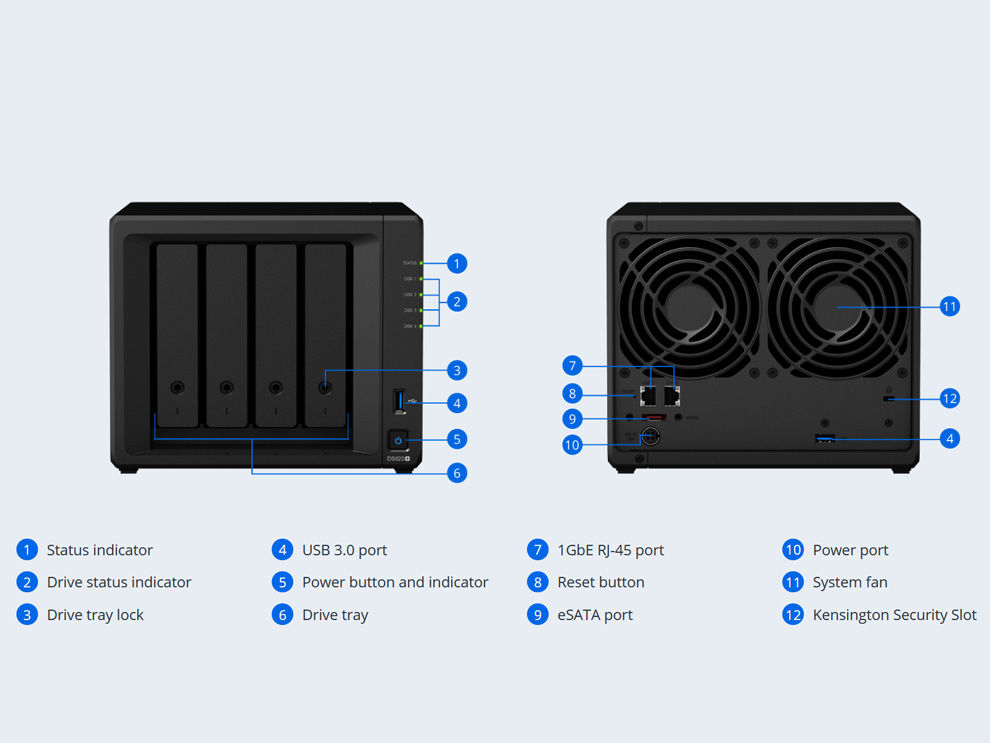 The rear panel on which the ports and fans are mounted happen to be made of metal as well. We do see the main SoC mounted in a fashion that makes it slightly isolated from the chamber housing the hard drives and there’s even spacing to ensure airflow over the SoC heatsink. The DS920+ has a single 4G DDR4 RAM DIMM installed with space for another one. The DS918+ made it easier to access both RAM slots but the DS920+ only allows you to access one module from within the cage whereas the other one requires a bit of disassembly. The external plastic housing needs to be removed first which then slides off and that allows you to access parts of the PCB on the right-hand side of the NAS. For the rear PCB, you have to remove the back panel and the fans.

Accessing the caching SSD bays is straightforward, simply turn the NAS upside down and there are two plastic panels which can be opened using one’s fingers. Even the SSD mounting mechanism is toolless which makes it even more convenient. For first time NAS buyers, Synology has made it quite convenient with the toolless design and the user manual is beginner-friendly as well. One additional feature that would have been appreciated would be to have a quick copy/dump button so that you could quickly connect a USB device and transfer all files without having to open the UI.

For the SoC, Synology is using the Intel Gemini Lake platform (Intel Atom J4125) which is a step up from the DS918+ and brings DDR4 support. The Intel Atom J4125 is a 4 core / 4 thread processor with Intel HD 600 Graphics featuring 12 Execution Units. It has a base clock of 2.0 GHz and can rise to 2.7 GHz. Gemini Lake also adds support for USB 3.1 and Type-C interfaces but Type-C as a storage interface is yet to be as widespread as Type-A connectors. Most external SSDs that we’ve come across ship with Type-C and Type-A cables and that could changeover to just Type-C in the years to come. So hopefully, we’ll see NAS units adopting Type-C around the same time.

We used four Seagate IronWold 2TB drives which were all CMR (Conventional Magnetic Recording) drives so there would be no problems related to rebuilding a RAID array if things had gone south. We threw in NVMe SSDs to help speed up the caching and a 240 GB SSD did just fine with the job. Over the course of one month, we had a cache hit rate of 48 per cent, on a weekly level it came down to 9 per cent and on some days, we’d hit 82 per cent. We’d configured the drives on a RAID 5 array since that seems to offer the best of data redundancy as well as performance. We could switch to RAID 0 but then again, we’re using HDDs on Gigabit Ethernet, so it’s not exactly prudent to give up redundancy to negligible speed gains. 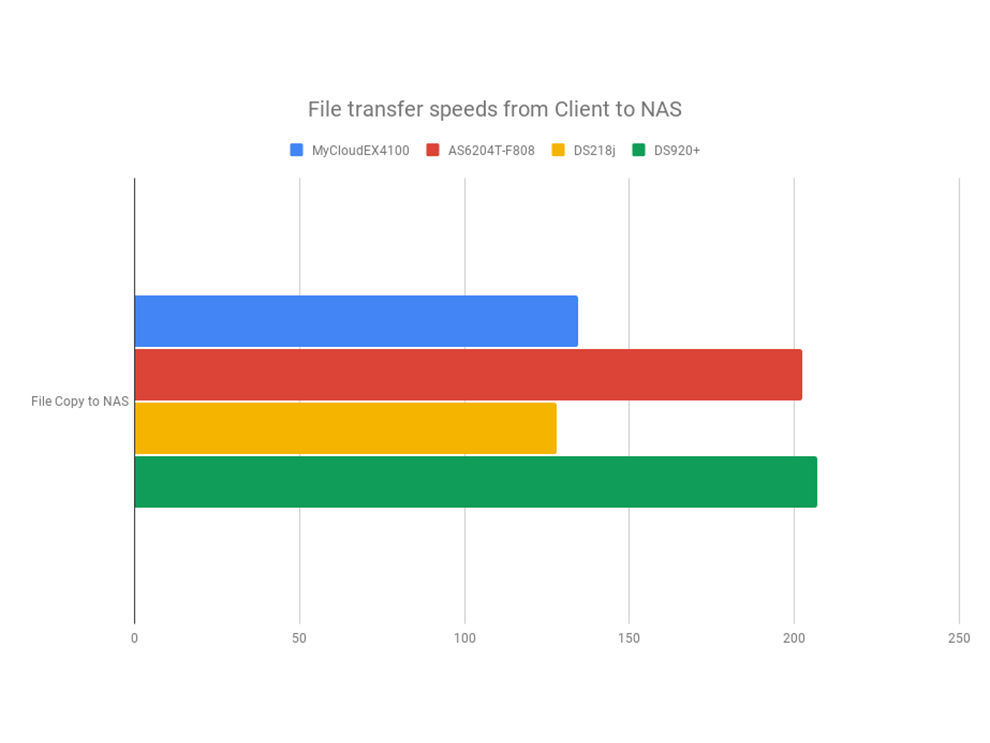 In our RAID 5 benchmarks, the Synology DS920+ outperforms the DS918+ by a decent margin. In fact, we were hitting the Gigabit Ethernet threshold speeds in quite a few benchmarks and it seems that we might have to upgrade our networking infrastructure to get the little extra performance that we’re missing out on. Thankfully, the DS920+ comes with two Gigabit Ethernet ports and you can team them together using Link Aggregation to push the envelope even further. Of course, you’ll need Link Aggregation or 2.5G Ethernet ports on the other end to make good use of the extra bandwidth. 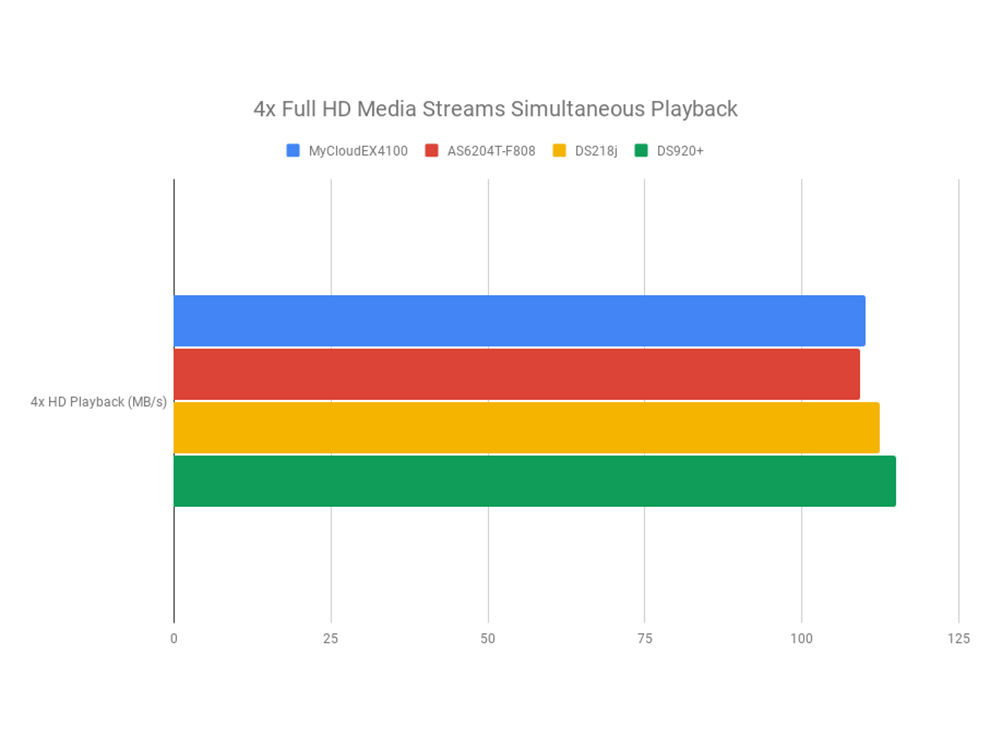 When streaming four HD videos off the NAS, we could see a throughput of about 114.89 MBps which is practically the highest we’ve seen so far. For copying a massive chunk of irregularly sized files off and to the NAS we saw an average throughput of 12.3 to 13.6 MBps which is again, the highest we’ve seen across NAS devices so far. Needless to say, the SSD cache helps a lot. There’s a handy tool that tells you the percentage of cache hit over a given period of time. Here’s what we saw with our test unit. 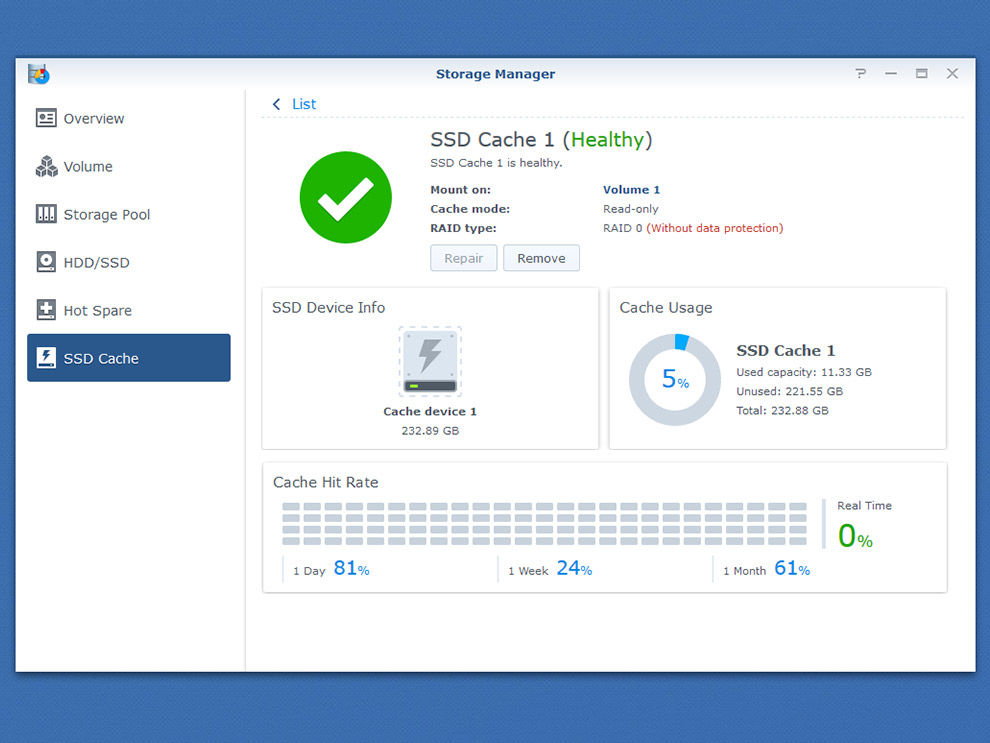 The NAS was always quick to respond whenever accessed even after extended periods of inactivity. All in all, this is a snappy unit. All tests were performed on DSM 6.2.3 which is the latest firmware for the device.

The Synology DS920+ is a decent upgrade to the DS918+. The move up to Intel Gemini Lake and DDR4 are welcome changes that add to the unit’s responsiveness. Moreover, with the newer processor, Synology has plenty of performance headroom to introduce newer features and applications with AI components that can leverage the HD600 IGP for an improved user experience. At 60K, the DS920+ is one of the most feature-rich NAS devices you can get.