Spectre with a yearly CPU and aesthetics update 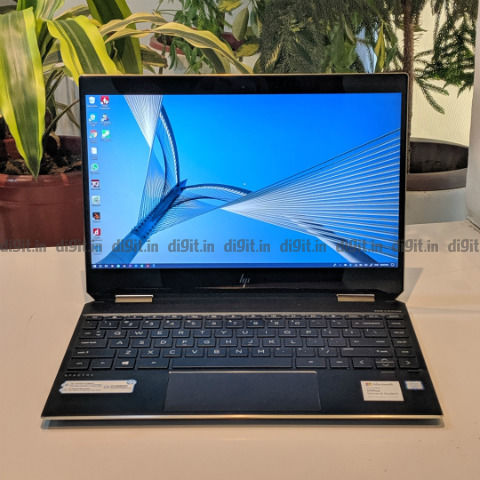 Since its humble beginnings as the name of an Intel Haswell-powered detachable hybrid Ultrabook some half a decade ago, the brand name “Spectre” has come a long way in the history of HP mobile computing devices. Today, Spectre continues to represent HP’s slimmest, lightest, and most premium laptops.This is true even of the laptop in question right now: the HP Spectre x360. Let’s take a closer look.

HP announced the 2019 version of the Spectre x360 in late 2018 and launched it in India earlier this year in February. The updated model is powered not by Intel’s 9th Gen Core series CPUs but the “Whiskey Lake R” refresh of its 8th Gen chips. In addition, HP seems to have given the convertible’s body a proper facelift. The Spectre x360’s edges are now “gem-cut”, giving the laptop more character.

HP has generally gone to mad lengths to make its Spectre devices appear sleek and sharp. It seems to me that the Spectre line-up has gradually evolved to become to HP what the RAZR series of mobile phones was to Motorola. It only takes a few seconds with the new Spectre to see that the 2019 version brings more pizazz to the convertible’s design. To start with, HP has blessed it with a new colour called Poseidon Blue, which is essentially a shade very close to navy blue. Against the brushed golden accents on the hinges and borders, the new colour makes the Spectre look arguably attractive. 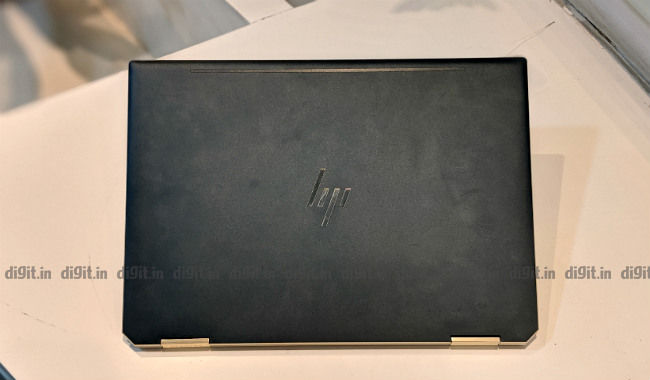 According to HP, the Spectre’s body has an all-aluminium double-chamfered finish with a “gem cut” design. That’s HP-speak for the trimmed edges on either side of the display hinge. While one of the two edges (or facets) gets a USB-C port, the other houses the power button. The new Spectre x360 feels fairly sturdy and grippy in the hands. At 1.32 kilogrammes, it feels quite lightweight too. In other words, the new Spectre x360 is greatly similar to the new Apple MacBook Air in terms of feel. At the same time, the new Spectre looks cool and understated. It’s easy to imagine somebody in business formals holding the Spectre x360 while walking out of a business class lounge at an airport. 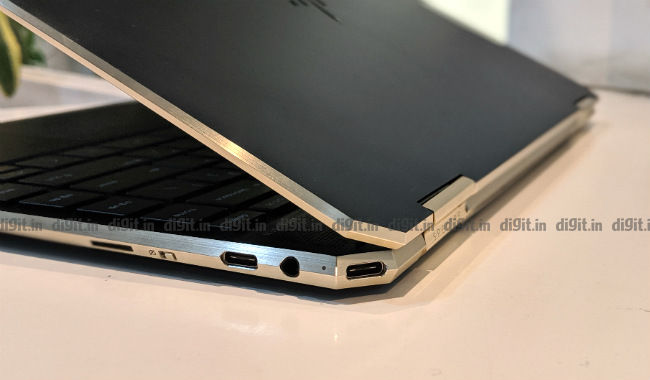 The HP Spectre x360 comes with a 13.3-inch touchscreen display with a Full HD resolution. The IPS WLED-backlit panel is protected by Corning Gorilla Glass NBT. According to HP, the display has a maximum brightness of 300 nits and a pixel count of 166 pixels per inch. The laptop comes bundled with an HP Pen stylus. Pressing F1 on the keyboard enables (and disables) HP Sure View, a privacy guarding feature for when you don’t want others around you to peek at your work. It makes the screen more bluish but works effectively. 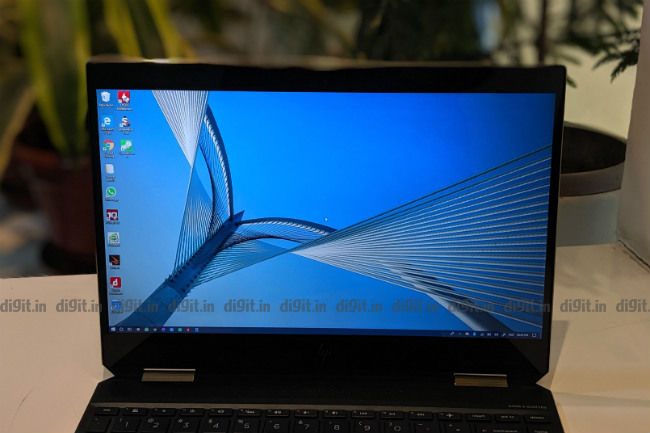 The colours on the review unit’s display appeared full and rich while browsing on the web and watching videos. At no point did they seem washed out or oversaturated. The brightness too was sufficient for most indoor spots, like conference rooms. According to our test kit, the panel is capable of reproducing 95 percent of the colours in the sRGB colour space and 74 percent of the colours in the Adobe RGB colour space, which is up to the mark. 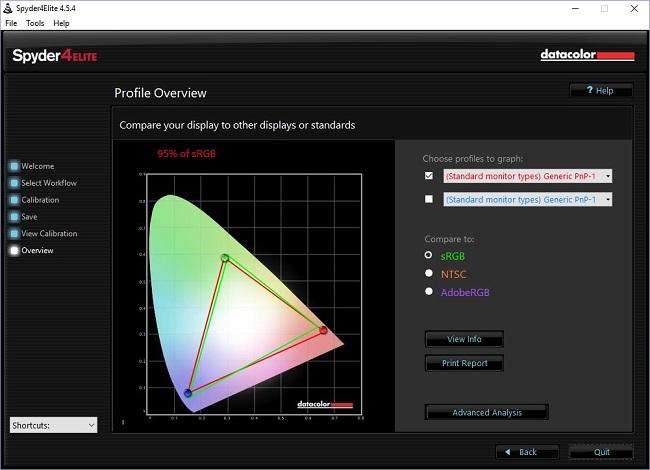 The Spectre’s display is positively responsive to touches. There’s minimal latency during inputs and the palm rejection feature works well while scribbling notes and drawing figures. The screen shows some signs of flex when the device is used in tablet mode but it’s no big hindrance. If anything, the display’s glossy finish gets distracting when used in bright areas. Overhead lights in say, an office or clinic, can be a source of distraction because of the screen’s reflectiveness. 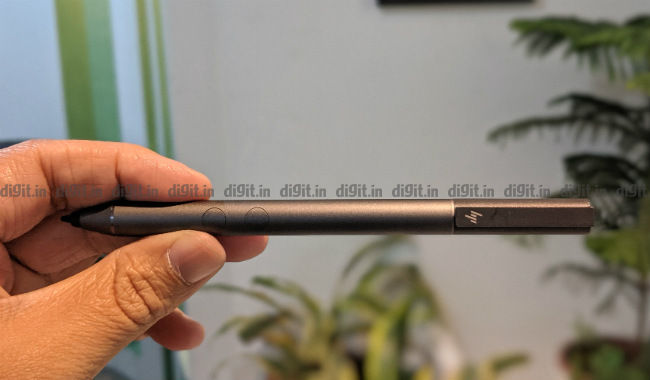 Sound from the laptop’s speakers is underwhelming even though the speaker strip above the keyboard bears an etched Bang & Olufsen logo. Popular tracks like Starboy by The Weeknd and One Minute to Midnight by ZHU sound tinny and unrefined. Bass is neither heard nor felt from the device. On the plus side, they’re quite loud. These speakers are best reserved for vocals. In comparison, the speakers on the MacBook Air offer a more balanced output, which is something any average user will expect from a laptop well beyond the 1.5-lakh-rupee mark. 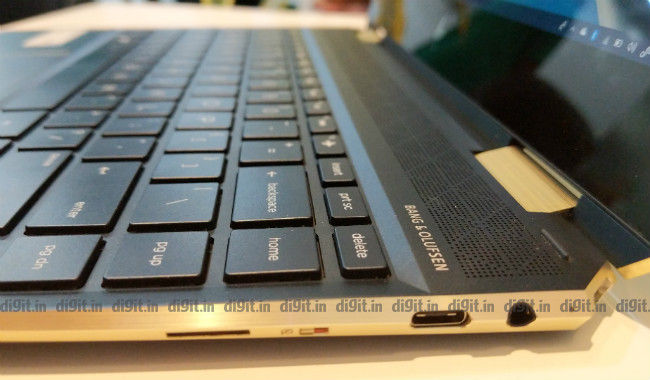 Despite being a thin and light convertible device, the Spectre x360 comes with a few usable ports. On the left side of its body, it has a single USB-A 3.1 Gen 2 port and that’s it. On the right side, it has two USB-C 3.1 Gen 2 ports (one of which is on the “gem cut” facet), a 3.5mm audio jack for headsets, and a microSD card slot. In addition, there’s a physical switch to turn the webcam off. When enabled, no application can access the device’s webcam, including Windows Hello (for face unlock). Those who prefer fingerprint authentication instead can use the fingerprint scanner just below the keyboard, which takes some time to authenticate but works without fail. 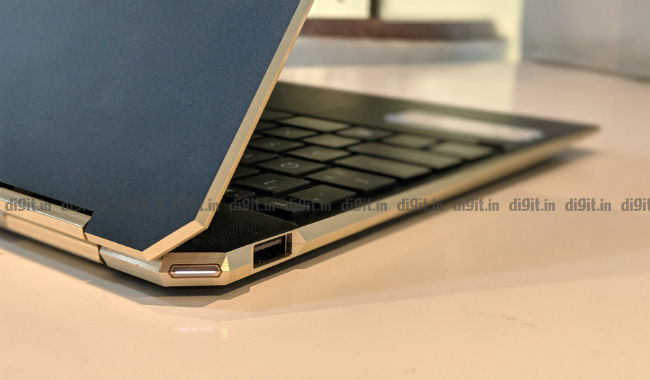 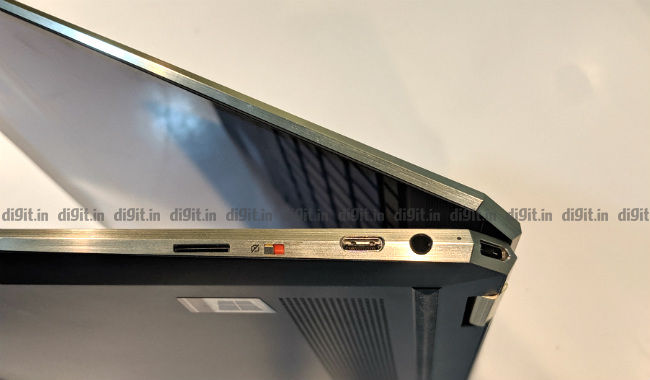 The keyboard is one of the many elements on the Spectre x360 that remains unchanged from last year’s model. Though some may find the two-stage backlit unit comfortable to type on, I personally am not a big fan of it. The keycaps feel too small and oddly spaced. They also feel like they could have used a shallow dimple on the  top  surface for easier identification. On the  bright side, the feedback from the keys are not  bad. The keyboard also gets dedicated keys for Home, End, Page Up, and Page Down functions. 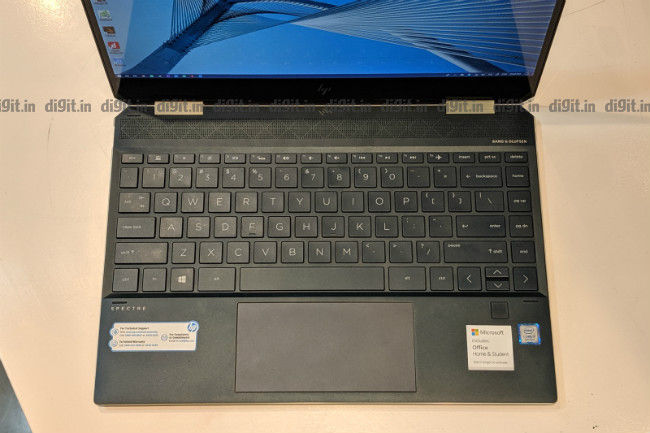 The touchpad has always been and continues to be the bête noire of HP laptops, and that’s mostly because the company refuses to use Windows 10’s native precision drivers for its touchpads. What this means is that the Synaptics-driven touchpad on the Spectre x360 does not support all the multi-finger taps and swipes. For example, a four-finger swish won’t let you jump to the next virtual desktop, and a three-finger click can’t be reprogrammed to do anything else but bring up Windows Search. HP honestly ought to get with the times in the touchpad department.

Sadly, we do not see an Intel 9th Gen chip on the Spectre x360. Instead, we see a “Whiskey Lake R” refresh of the good old 8th Gen Core series CPUs. The review unit, which is the top-of-the-line variant, was powered by an Intel i7-8565U Quad-core CPU with a base clock speed of 1.8GHz. The 14-nanometre chip was introduced in the third quarter of last year, so HP quickly incorporated it in its Spectre facelift. The RAM on the review unit was a standard 16GB, and the solid-state storage, 512GB. The biggest change since last year then is the CPU alone. 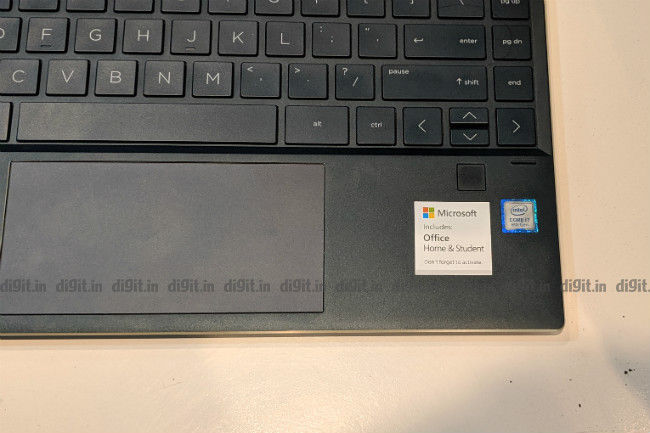 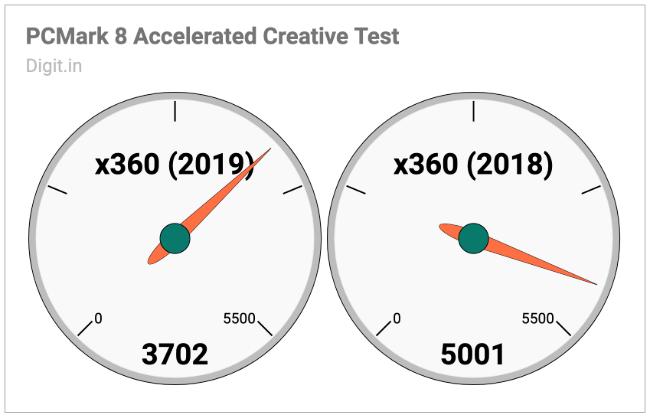 In everyday use scenarios, the review unit worked splendidly. The Spectre managed multitasking on applications like Word, Excel, PowerPoint, WhatsApp for PC, Steam, File Explorer, and Chrome quite well. The laptop ran multiple instances of some of these apps across many virtual desktops without breaking a sweat. The laptop even handled simultaneous background downloads and app installations without any hiccups. For the average corporate employee, crunching numbers, browsing, video watching, and editing text documents should be no trouble on the new Spectre. 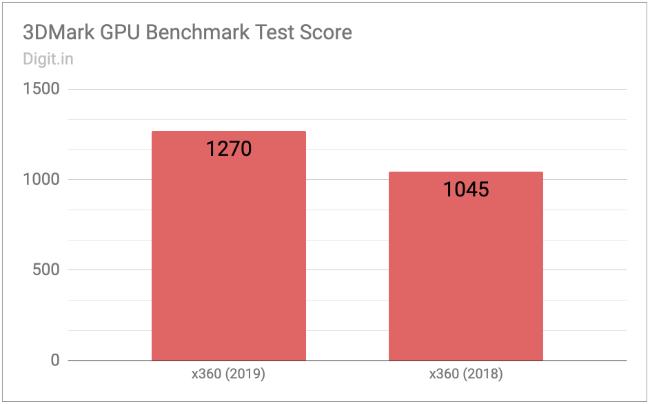 The HP Spectre x360 comes with an inbuilt quad-cell 61Wh lithium-ion polymer battery that’s not user-replaceable. On our standard battery benchmark test, the review unit lasted 4 hours, 17 minutes, which is good but not a significant jump over last year’s model. In everyday use scenarios, the review unit’s battery fell from full charge to 54 percent in a little less than three hours. During the tests, Wi-Fi and Bluetooth were left enabled, and the laptop was used for writing, music playback through the speakers, background app installs, and video playback. Expect the new Spectre x360 to last a little over six hours on a single charge in general with moderate use. 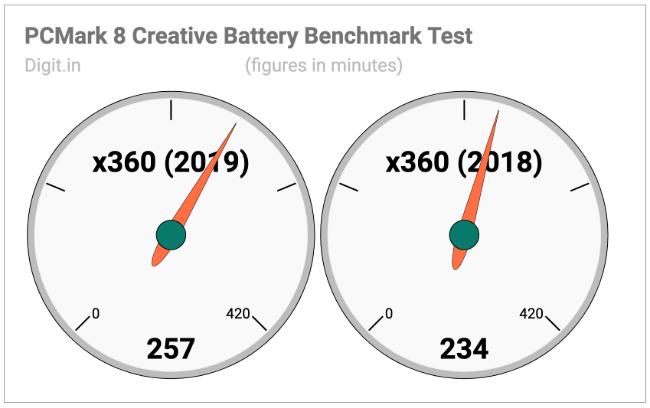 To sum it up, the Spectre x360 remains true to its character, which is that of a lean and mean business machine designed for portability and show. The new Intel Core i7 CPU keeps the Spectre up to date and helps boost battery life  by a few more minutes. At the same time, its already attractive packaging gets a significant styling and paint job from HP that includes aluminium panels and “gem  cut” edges for added character. 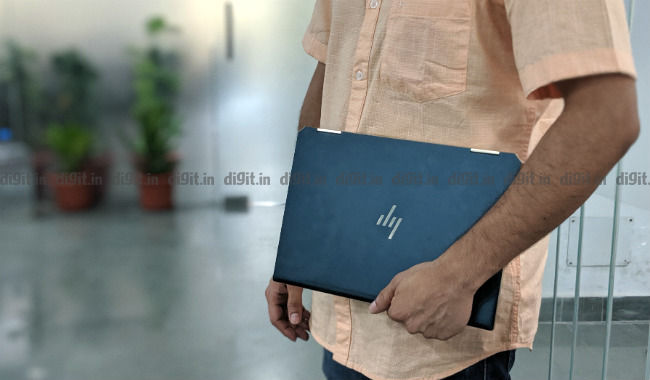 There’s just one fly in the ointment though: apart from the easily noticeable upgrade in the CPU and aesthetics department, there’s little that’s new about the Spectre x360. It’s a routine yearly refresh HP had to make to keep its flagship convertible looking fresh in the eyes of customers who pay over a lakh and a half rupees for the latest Core i7 CPU, 16GB of RAM, 512GB of solid-state storage, and oodles of style.