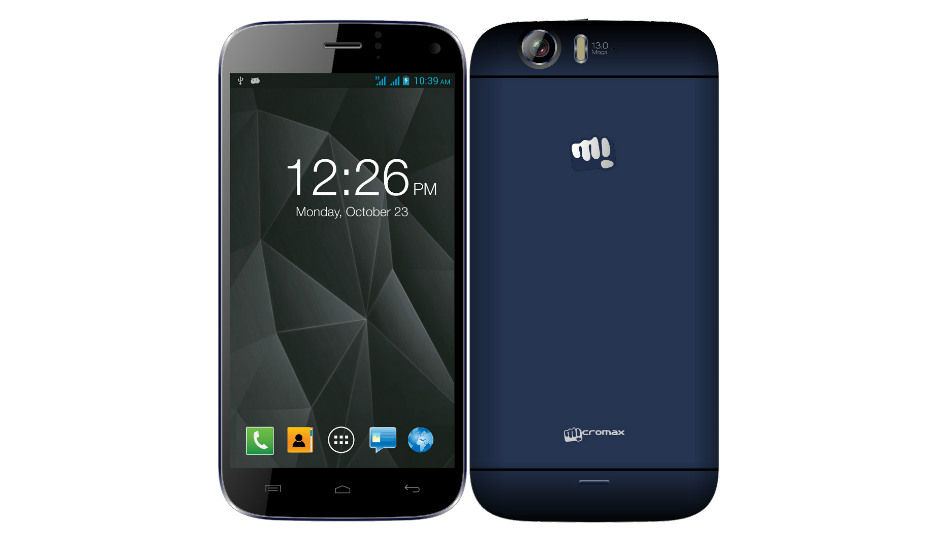 Micromax is on a roll!! The company that was once known for launching budget smartphones in India has launched a series of impressive mid-ranged smartphones including the Canvas Doodle 2, Canvas 4, Canvas HD and now the Canvas Turbo. As the name suggests, the Canvas Turbo runs on the MediaTek MT6589T (Turbo) chipset, has a full HD display, unibody design and a whopping 2GB RAM. Is it enough to keep you entertained?

The Canvas Turbo has an aluminum build, similar to what we have seen on the Canvas Doodle 2. You don’t have access to the battery or expandable storage. The display of the phablet is 5-inches and has a 1920×1080 pixel resolution giving it a pixel density of 440ppi. It has 16GB built-in storage and there is no option for expansion. The rear of the smartphone has a 13MP camera and the front has a 5MP shooter for video calling. The Canvas Turbo has the MediaTek MT6589T chipset with the CPU clocked at 1.5GHz. The smartphone runs on Android 4.2 Jelly Bean straight out of the box.

Here is a quick specifications comparison between the Canvas Turbo and the Samsung Galaxy Grand Duos, Lenovo P780, Panasonic P51 and the Sony Xperia C.


From the specifications comparison it is clear that the Turbo has the best display and the CPU clock speed but lacks in terms of the battery and expandable storage.

Light and well built is the first thought that comes to mind when you look at the Canvas Turbo. The smartphone has a design very reminiscent of the Canvas Doodle 2. The Doodle 2 has a removable panel below which you had space for the SIM cards. Here, that isn’t the case and you have to use a pin to pop out the SIM trays – a mechanism seen on the Nexus 4, iPhone 5, Huawei Ascend P6 and more.

The front is the same as any other Micromax Canvas smartphone – be it the Doodle 2, or the Canvas 4. You have the standard three capacitive buttons that appear below the display. The rear of the phone is aluminium making it look really sturdy. The review unit we received is dark blue in colour and looks quite impressive. The rear of the smartphone has the 13MP camera with the flash. You don’t have access to the battery of the smartphone, though The rear has a matte finish to it and I really liked it.


Overall, the design of the smartphone is really good. It is well built; light and I really can’t find anything wrong with it. To nitpick, one can say that there is no access to the battery or expandable storage but that is the case with a lot of smartphones available today. It isn’t the slimmest or the lightest, but its design is impressive.

The Canvas Turbo runs on Android 4.2 Jelly Bean. The interface is stock Android for the most part with a few Micromax specific UI elements and apps thrown into the mix.

M!Live gives you access to local Indian content such as ringtones, wallpapers and more. The M!Unlock app gives access to the blow or shake to unlock feature, one that was introduced with the Canvas 4.


With the Canvas Turbo, Micromax has introduced a feature called ifloat. The app gives you the ability to easily access the most frequently used apps from anywhere on the device. No need to come back to the home screen or the apps listing page. The ifloat apps gives you “pop out” apps, something we have seen on the LG’s smartphone skin and on the Asus Padfone. For example, if you are on a call and want to do other work on your smartphone, you will have a pop up present that will give you access to controls such as hanging up, loudspeaker, dialer pad, mute and more. Same thing for SMS, pop up browser and the video player. The pop out video player however has crashed on us quite a few times on the smartphone.

Overall, the UI is stock Android, which I liked, and the preloaded apps add local content to the smartphone, something Micromax has introduced on all its Android smartphones. There is no bloatware on the phone and that is a good thing. The ifloat app is a neat addition even though it is a bit buggy at times.

Coming to the performance of the Canvas Turbo, here is a quick look to see how it performs when compared to other smartphones in its price range.


From the above benchmarks it is clear that the Canvas Turbo’s performance is in line with the competition. It hasn’t scored the best but it isn’t the worst either. The Xolo Q1000S on has a 5-inch 720p display and is powered by the MT6589T chipset. It has more power under the hood and needs to render data for a 720p display, which requires less oomph than rendering for a 1080p display. All the smartphones here run on the MediaTek chipset.

Moving on, the display of the Canvas Turbo, at full brightness is very vibrant. The 5-inch display has a pixel density of 440ppi, which is good. We saw the standard array of videos on the device ranging from MKV to MP4 and AVI. The videos were plagued with the same problem that we have with the MediaTek chipset. You have the MKV files where only the video runs and the audio isn’t recognized. Surprisingly, the native video player crashed when we ran AVI files on it and that’s a bummer. We have seen the same problem occur on the Canvas Doodle 2.


The native video player is the same that we have seen on the Canvas 4 and the Canvas Doodle 2. You can swipe up and down on the left to control the brightness and do the same on the right for the volume. You can also watch the videos in a small window on the display letting you use other apps while watching the video. Just like the Canvas 4 and the Doodle 2, the Turbo also boasts of the “Smart Pause” feature, which is that the video will pause once you look away.

Watching videos on the Canvas Turbo was a real treat. The audio is loud and clear. The display is vibrant and very crisp. The viewing angles are great too.


Overall the performance of the smartphone was smooth, and there is the occasional stutter found on almost all Android phones.

The experience of interacting with the display feels good. The keyboard is stock Android and there is enough display real estate for you to have a comfortable typing experience.

Games such as Angry Birds, Temple Run 2 and more ran quite well with heavy games such as Dead trigger stuttering at times. Real Racing 3, as always, refused to run.

If you have a budget of Rs. 20,000 you are spoiled for choices as far as options are concerned. You have the Gionee E-Life E6 with similar specifications and a very attractive design. You have the Xolo Q1000S that is a powerhouse performer. You have the Lenovo P780 that showcases a 4000mAh battery. All of them run on the MediaTek chipset and try to add a few unique features to distinguish themselves. The Canvas Turbo does the same. It has a good build, gorgeous display and is a good package deal. On the down side, the native video player is buggy and Real Racing 3 refused to run.

Really, you can pick up any of the above mentioned smartphones based on the specific features you like and you’ll get a very good experience for the price.