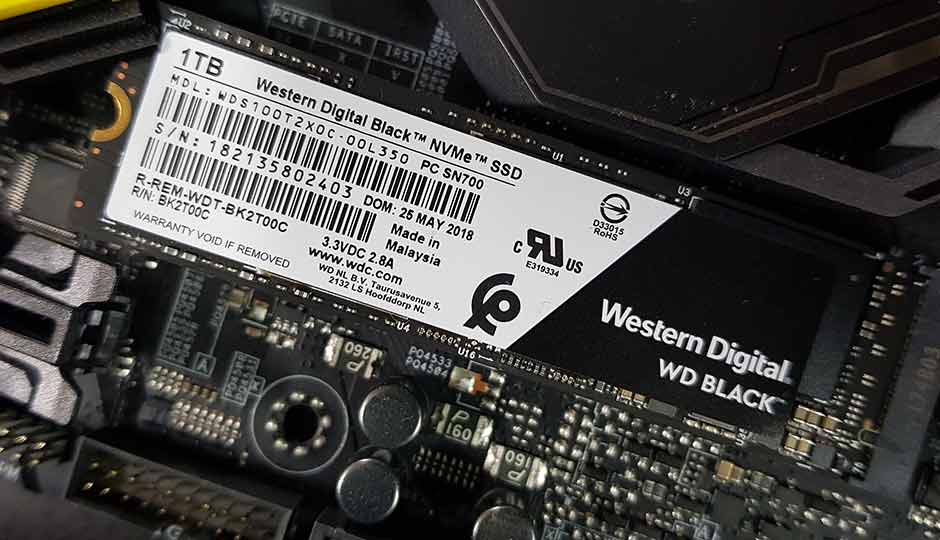 WD went back to the drawing board with their lineup of SSDs. The initial batch of Blue, Green and Black SSDs entered an already saturated market with little to offer over the competition. Even the pricing, of say the WD Blue, was a little higher than similarly performing drives making it a difficult buy. However, the new WD Black lineup with support for the NVMe protocol under its belt is poised to carve out a name for itself. Powered by a proprietary WD (SanDisk) controller, this new lineup shows promise.

As mentioned previously, the controller on the WD Black NVMe SSD is proprietary. We know little about these puppies aside from the fact that the numbers on paper seem to be really competitive. It should also be noted that the exact same model can be purchased as the SanDisk Extreme PRO SSD by the model number SDSSXPM2-1T00. The controller makes use of PCIe x4 lanes meaning that there’s plenty of headroom for these drives to work their magic. Let’s take a look at the specifications of this particular SKU.

The layout of the new WD Black NVMe SSD is fairly simple with the proprietary WD controller taking up a lot of the real estate in the centre. As mentioned previously, this controller is made by SanDisk and the exact same configuration is also being marketed as a SanDisk SKU.

The entire top face has a sticker running across it. Now a sticker might be a silly thing to talk about but what some of the other manufacturers do is that they have a copper plate on which the information is printed. This way, the sticker itself acts as a massive heatsink and when you mount it on motherboards which have additional heatsinks on the top, the copper ends up being a better thermal interface than the non-conductive plastic sticker. 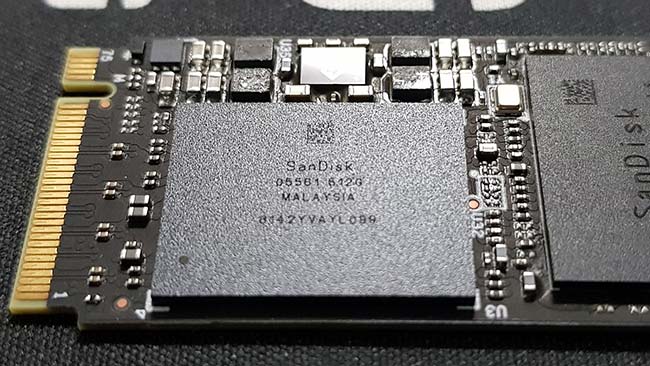 Coming back to the NAND, with these new SKUs, WD is using the newer 64-layer BiCS 3D NAND that they unveiled with the SanDisk Ultra 3D and WD Blue 3D NAND SSDs that launched last year. So both the NAND and the controller has changed this time around. 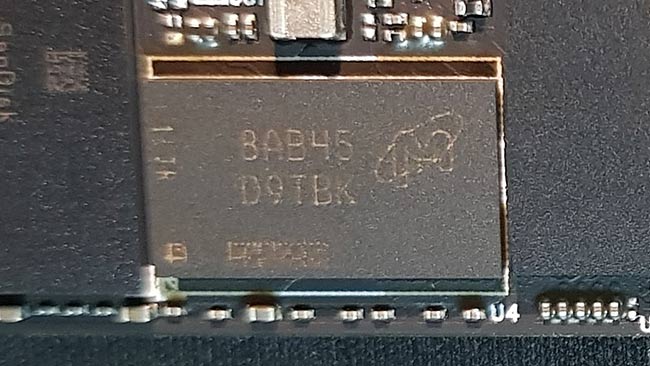 Lastly, we have the SDRAM memory which is from Micron. The FBGA code points to a part numbered MT40A512M16JY-083E:B which would indicate that this is a DDR4 chip rated at 1200 MHz or DDR4-2400. This is also an upgrade over the SATA SSDs from SanDisk which all used DDR3L memory chips instead. 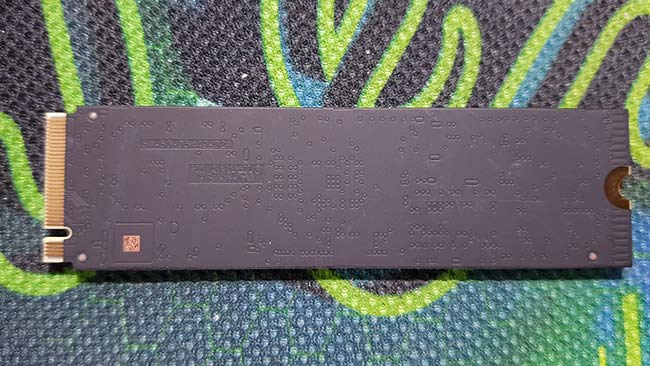 The underside of the WD Black NVMe SSD (2018) is unremarkable. Keeping the underside clean is a strategy followed to ensure compatibility with low riding M.2 sockets. So we’re not blaming WD here.

Overall, the WD Black NVMe SSD (2018) is an entirely new package with an air of mystery about it thanks to the proprietary controller. However, this also marks a significant change in the way they’ve designed SKUs so far. Now WD is targeting the enthusiasts with NVMe, so let’s see how well this drive performs.

We start out by running a few synthetic industry favourite benchmarks prior to conditioning the drives. In CrystalDiskMark’s random and sequential tests, we saw QD32 read speeds of 3400 MBs and write speeds of about 2850 MB/s which is pretty close to the spec sheets. The only difference between the random and 0-fill runs happens to be the sequential transfers which differ by 200 MB/s in favour of random data. So that’s always a good sign.

Another benchmark that we use for SSDs is Anvil which is a bit more comprehensive than Crystal Disk Mark. However, it too is run prior to conditioning. The IOPS figures for the write cycles are synonymous with that’s mentioned in the data sheet but for the read cycles, it falls way below the datasheet metrics. 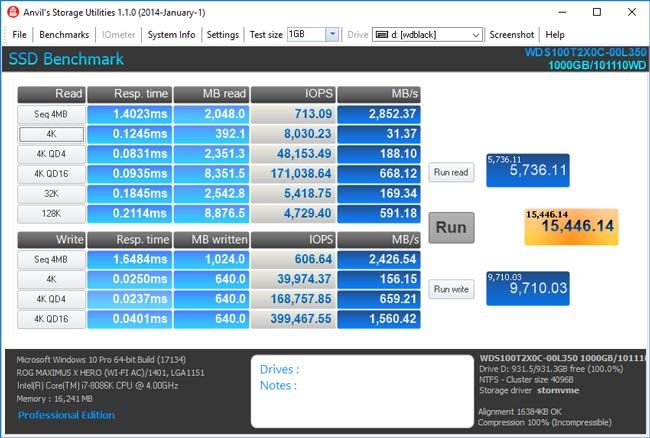 The net score, however, is quite high. We then moved on to conditioning the SSDs to put some wear and tear on the NAND to simulate a more realistic condition that the SSD will actually operate in for the longest time of its life. Let’s examine the results after conditioning.

The WD Black NVMe (2018) surprised us by matching or even bettering the performance of the Samsung 960 Pro. While the 960 Pro retains a lead in sustained sequential reads, the WD Black NVMe nudges ahead in bursty performance. However, Intel’s 760p 3D X-point drive still performs better in bursty.

Once again, the WD Black NVMe SSD (2018) outperforms the competition in bursty as well as sustained write cycles. It’s better than the Intel 760p as well as the Samsung 960 Pro.

It turns out the the new proprietary controller from WD is indeed a better performer in all the parameters that matter the most.

SSD performance isn’t just about pure read speeds or write speeds anymore. All new controllers are quite capable of handling synthetic loads quite easily leading to metrics which aren’t indicative of real world performance. So we’re going to have a look at latency timings for each operation across varying queue depths. 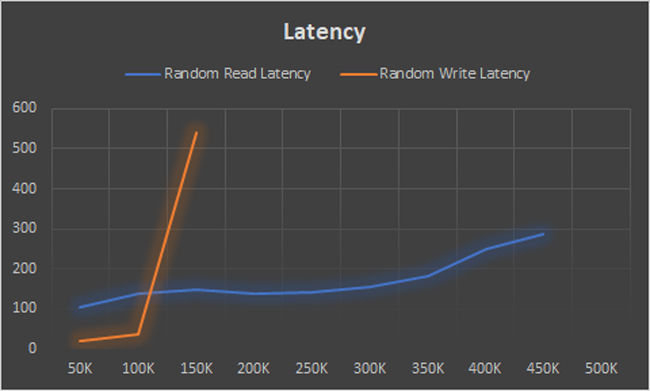 The Y-axis here is the latency in microseconds while the X-axis has the IOPS figures. We can see that the read latencies form a rising curve with a very shallow gradient which denotes consistency in latency timings. However, when we look at the write latencies it shoots off into the sky around the 150K IOPS mark. Incidentally, the Anvil benchmark also topped off at 170K IOPS. There seems to be a correlation here.

The new WD Black NVMe SSD is a really good SSD. It managed to best some of the enthusiast favourites in quite a lot of the benchmarks. The Intel 760p and the Samsung 960 Pro did end up being a bit competitive but at the end, the WD Black NVMe turned out to be the better drive. The latency timings for write operations seems a bit wonky, hopefully a firmware upgrades in the future should take care of that. This unit is a bit difficult to find online and it’s just the dedicated computer stores that are carrying it. Since this has turned out to be quite the overachiever, this should change and you’ll find it on all your favourite ecommerce stores. For the price of 32,999, the cost per GB comes down to Rs.33 which is quite economical as well. Let’s just say that WD’s efforts with the new controller and NAND have finally worked their magic