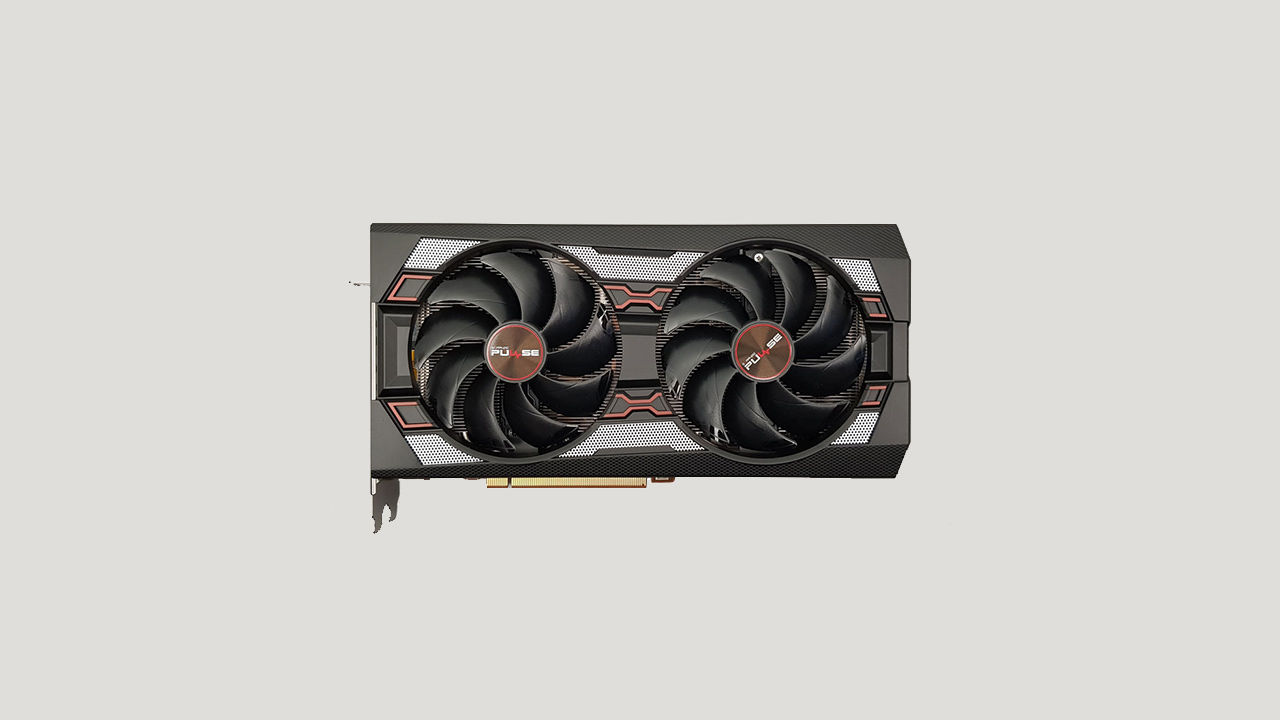 
AMD’s new RDNA-based Radeon RX 5000 graphics cards have turned out to be quite an improvement over their GCN cards. The RX 5700 XT and RX 5700 have proven themselves to be quite competitive with NVIDIA’s graphics cards and have even bested the competition in a lot of video games. The RX 5600 XT is very close to the RX 5700 in terms of specifications and is expected to be just as good. However, the budget RX 5500 XT which came out about a month ago turned out to be a little underwhelming. It was powerful but NVIDIA has so many cards competing in the segment that the RX 5500 XT has had a hard time establishing a proper footing. This is especially true for the budget card in India given how the local pricing was a little higher than expected. Hopefully, AMD has taken into account while deciding the price of the RX 5600 XT.

The configuration of the RX 5600 XT GPU is the absolute same as the RX 5700. It’s the exact same GPU with slightly lower clocks for the reference model. The only physical difference is that the memory has been reduced by 2 GB and accordingly has a reduced bus-width owing to the fewer memory chips connected. The memory bandwidth is rated for 288 GB/s at reference specs but that changed after the “bait-and-switch BIOS upgrade”. However, not all partner cards can meet the higher specs that is made available due to the BIOS upgrade so there will be plenty of performance differences between partner cards in the market.

The Sapphire Pulse AMD Radeon RX 5600 XT that we received looks very much like the Sapphire Pulse RX 5700 from the outside. It sports a twin blower design with the shroud being open on all sides.

The backplate is also similar to that of the Pulse RX 5700. There are plenty of large vents on the backplate and the underside of the GPU is also exposed. We can’t exactly call this a protective backplate but it’s at least something. 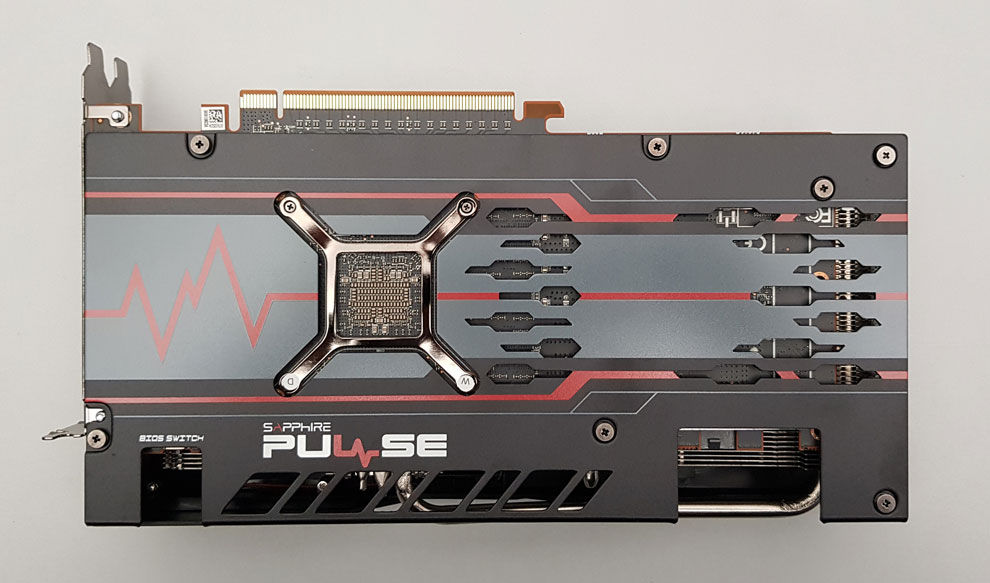 The topside is partially open and sports a little branding and we can see two spots for 8-PIN power connectors of which only one is populated. Towards the left, we see a small cut-out where the vBIOS switch is present. 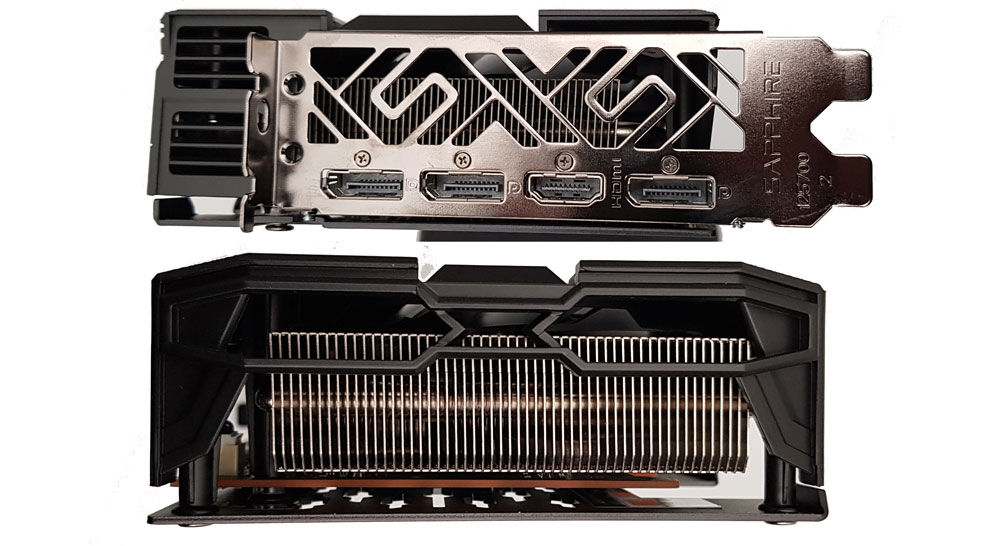 Removing the backplate reveals a fairly unpopulated underside of the PCB with some of the power delivery MOSFETs taking advantage of the backplate as a passive heatsink.

The finstack is as big as the card with negligible overhang. It’s got three heatpipes spread evenly throughout and there’s even a copper base plate making contact with the naked GPU. 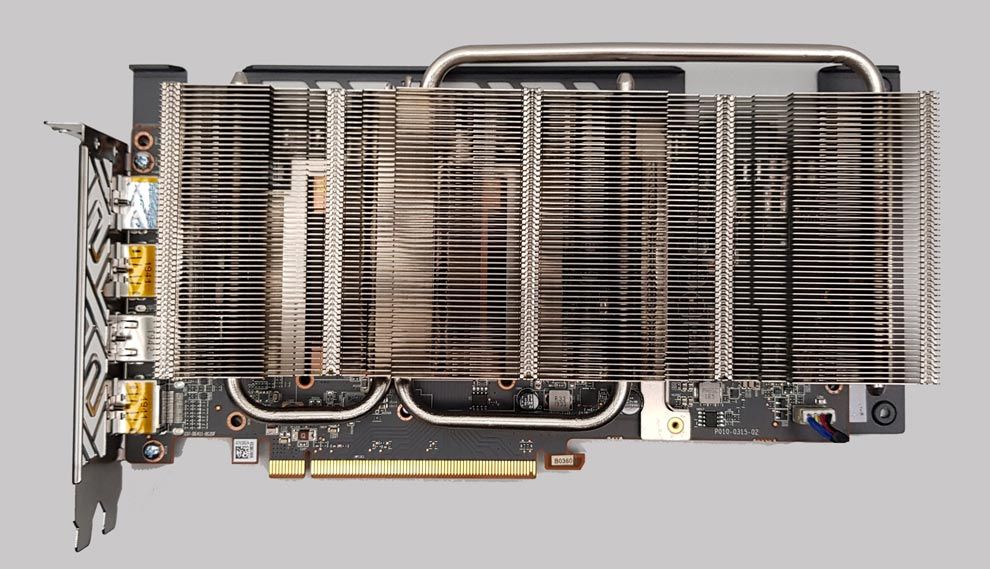 The PCB design is nearly identical to the Sapphire Pulse Radeon RX 5600 XT aside from the two fewer memory chips and the power connector. Since they’ve done away with one power connector, we also see some of the filter caps and fuses on the power plane for that line taken out.

Most of the graphics cards have been benchmarked on the current test rig whereas some of the previous cards such as the Vega 64 were run much earlier but they were all run on a Kabylake-based test rig with the memory configuration being the same. We switch off all features that may affect benchmark scores such as Radeon Boost because they alter the resolution dynamically to gain better performance.  This is what we’re currently running our benchmarks on.

Prior to the embargo lift, AMD had disseminated vBIOS updates which drastically altered the performance of the RX 5600 XT. This was not a uniform upgrade in performance as the RX 5600 XT is only available via partner boards and not all of them have the right design or ever the proper hardware to make the most of the newly issued vBIOS update. As a result, you now have a multitude of RX 5600 XT graphics cards with each performing differently. The new vBIOS update increases the board power by about 10W, the GPU clocks and the memory clock speed from 12 Gbps to 14 Gbps. Again, these numbers vary from card to card.

In an episode of the MSI Insider podcast, the folks over at MSI mentioned that the memory chips provided by AMD to partners are only validated to run at 12 Gbps so the cards are also tested to run at the same and running those cards at 14 Gbps cannot be guaranteed. Moreover, the initial batch of cards entering the market DO NOT have the vBIOS update. Which means it’ll be up to the consumer to perform the vBIOS update. If you happen to read the Warranty Terms of some of the manufacturers, then they clearly mention that the manufacturer “assumes no responsibility for any damages caused by improper operations of downloading or updating the vBIOS.” Essentially, you cannot claim warranty for the card if you happen to brick it during the update process. Check the warranty terms of your manufacturer before even considering purchasing an RX 5600 XT. After the initial batch, the cards that enter the market about 2-3 weeks later should be flashed with the new vBIOS from the factory. Certain manufacturers have updated their website with information about which cards have the old BIOS.

Globally, AMD released BIOS upgrades a couple of days prior to the embargo lifting but they seemed to have forgotten about disseminating the BIOS upgrades to all reviewers. We were one of the unlucky ones to have only gotten wind of the massive performance difference about 2.5 hours prior to the embargo lift and we still had to wait to get the new vBIOS once the official version was released by the manufacturer on their website. Which meant that the graphics card that we had benchmarked was a hypothetical one that none of you would have ever seen in the market. Obviously, we couldn’t publish a review for an imaginary device and we had to re-run the tests to get proper numbers indicative of the actual SKU. 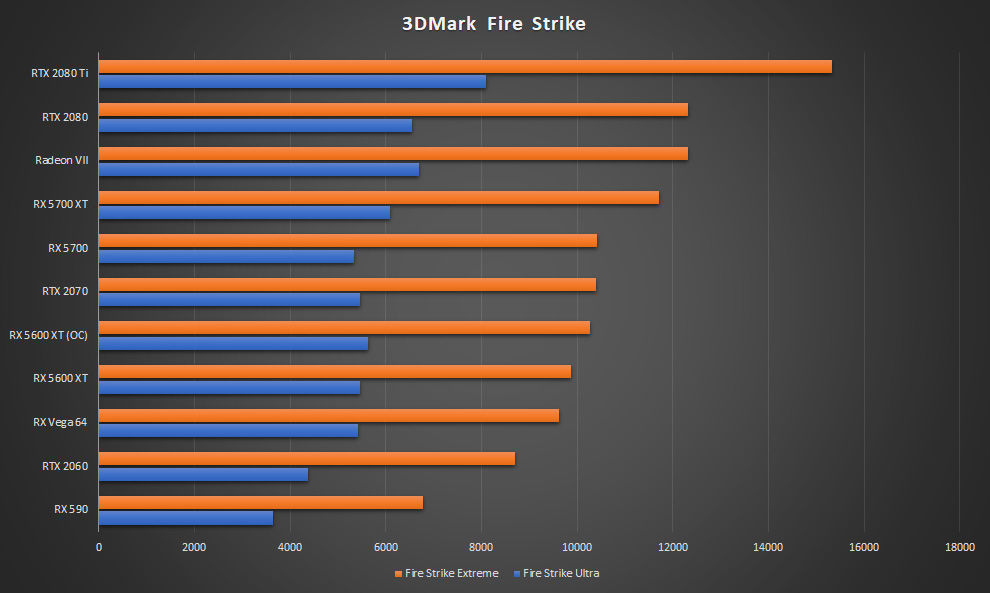 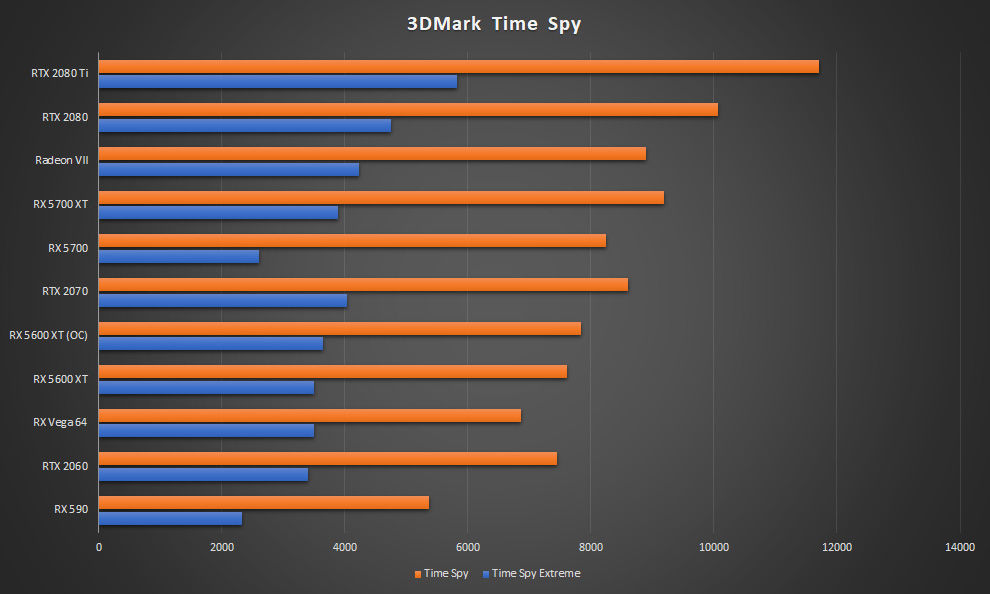 These are the benchmarks with the new BIOS, so they are indicative of the actual card which will be sold in the market. We tested the usual set of games at 1080p, 1440p and 4K resolutions. 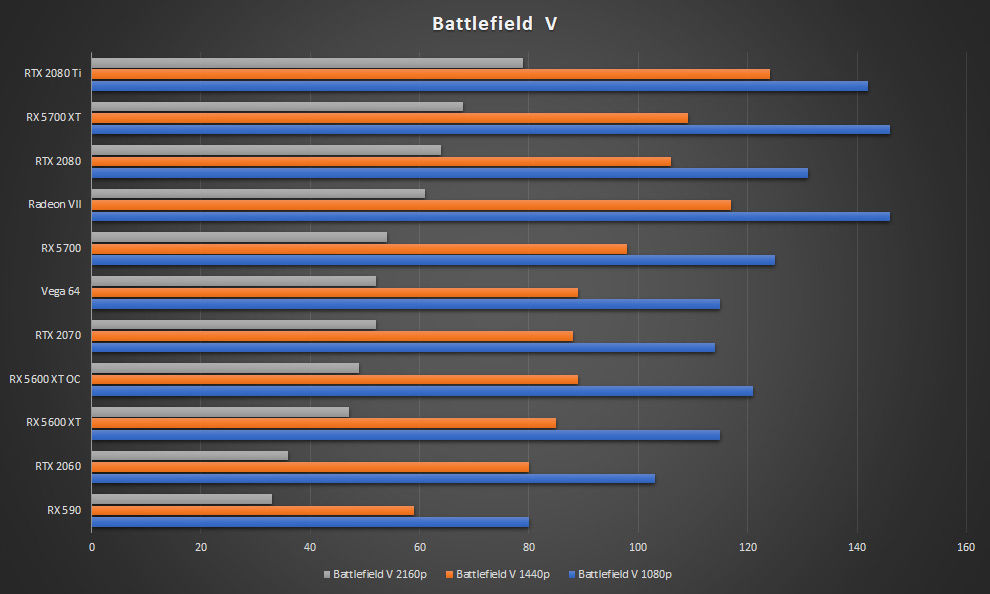 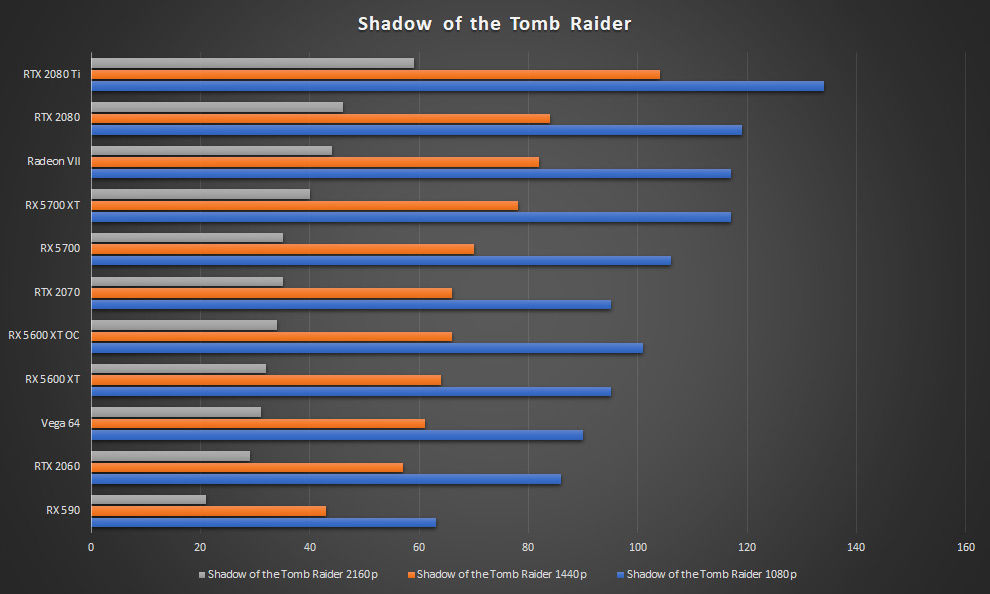 In Shadow of the Tomb Raider, the performance gain is between 10-12 per cent in favour of the RX 5600 XT across all tested resolutions. 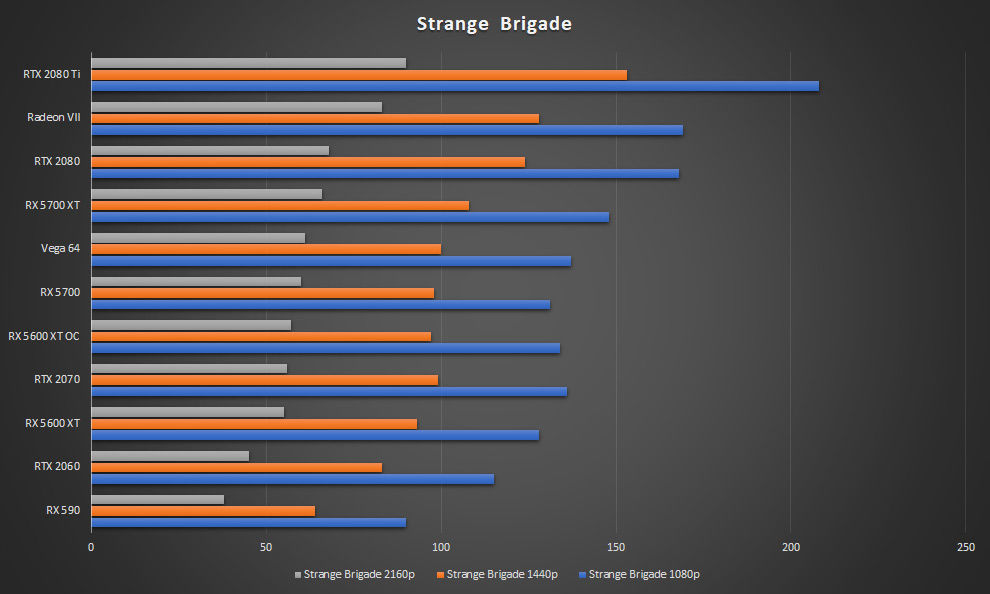 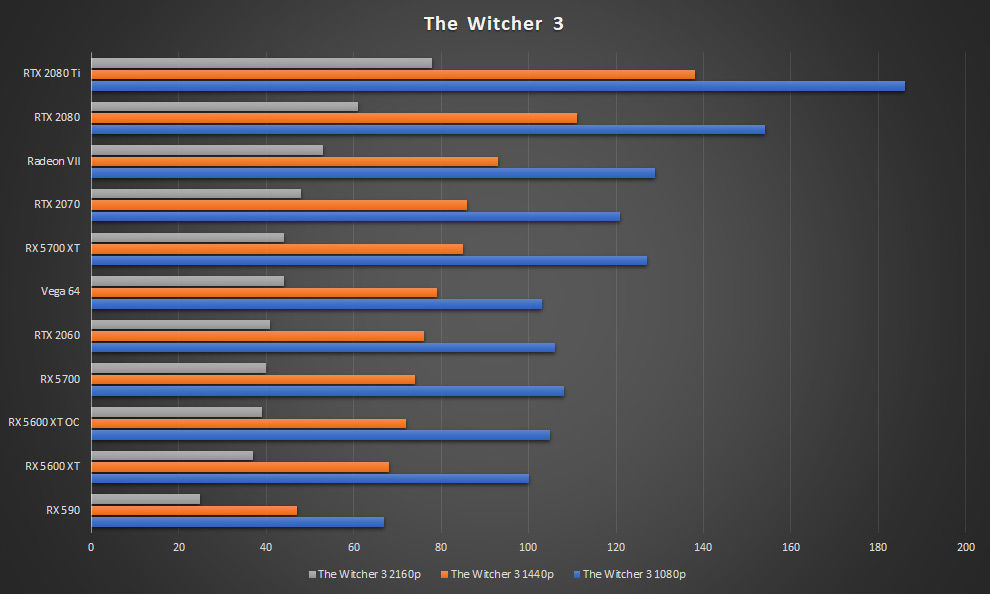 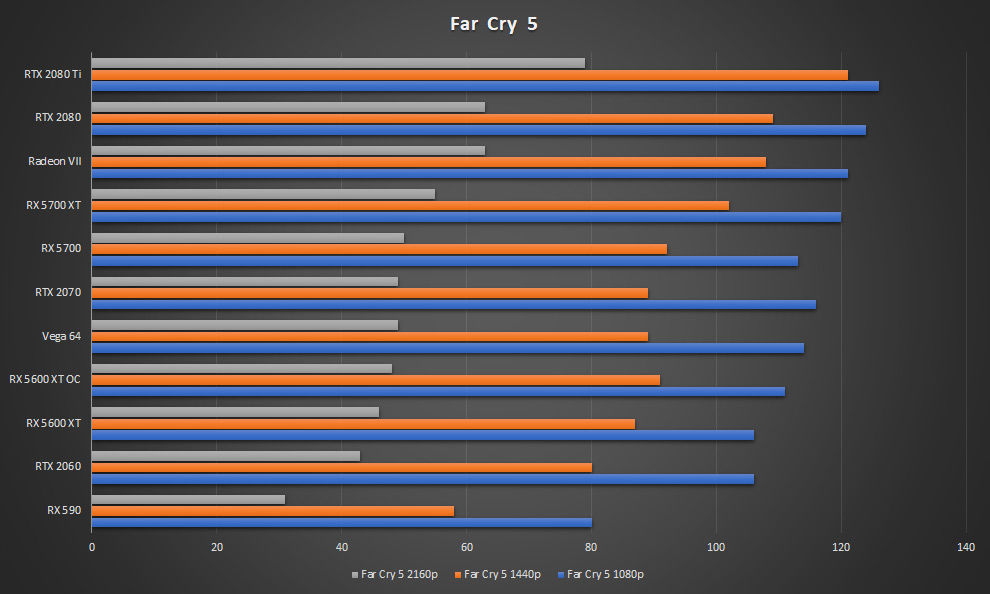 Far Cry 5 ran better with the RX 5600 XT but the margin of performance gain wasn’t large at 1080p or 4K. At 1440p, the gap was larger but it seems to be an anomaly. Performance scaling on the Dunia Engine hasn’t been consistent for a while now. Overall, it’s evident that the RX 5600 XT has a decent advantage over the RTX 2060 in most of the games we’ve tested. NVIDIA has the obvious advantage of having hardware-accelerated ray-tracing but we’re still to see wide adoption of the technology. Hopefully, things will change once the next-gen consoles release later this year.

The overclocking tool built into the Radeon software is quite versatile and easy to use as well. Usually, overclocking is a time-consuming process with countless permutations and combinations required before getting a good stable set of clock speeds. In the case of the new RDNA cards, AMD has set hard limits to the parameters. So if the graphics card has really good cooling and power delivery then it’s likely to sport better limits.


In the case of the Sapphire Radeon RX 5600 XT, we have the highest clocked RX 5600 XT configuration so the overclocking limits were also the highest as of now. The peak boost clock is 1820 MHz and the peak memory clock is 1860 MHz with the voltage level being 1.050V. In its default configuration with the new BIOS, we scored 7612 in Time Spy. When using the automatic overclocking feature, this went up to 7669 which is a very minor improvement. And with the manual overclock with all parameters set to the absolute maximum, the score jumped to 7836 points. The total gain attained was thus, 2.94 per cent. In gaming, this only amounted to about 2-3 FPS @4k, 3-5 FPS @1440p and upto 6 FPS improvement @1080p.

AMD’s new RDNA architecture which powers the Navi GPUs are very efficient. Even with the RX 5500XT, we had observed that the total power consumption was lower than the competing NVIDIA graphics card. The same trend continues with the RX 5600 XT with the idle power hovering around 53 watts while on load it would eat up about 200 watts. The RTX 2060 would take up the same amount while idling but on load it would go for an addition 40 watts in comparison to the RX 5600 XT. We really want to see how this will scale with a high-end RDNA graphics card that’s is expected to launch later this year.

Just like the RX 5500 XT before it, the RX 5600 XT is also doomed in India because of its Indian pricing. AMD’s official pricing was Rs.19,990 without taxes which works out to Rs. 23,588 but none of the retailers we spoke to were selling their RX 5600 XT cards at this price. The cheapest we found was a GIGABYTE RX 5600 XT for Rs. 26,199 which is more expensive than the RTX 2060 that the RX 5600 aims to replace. For comparison, we also picked the cheapest RTX 2060 which cost Rs.24,499. A good way to figure out if the card is worth its pricing in India is by cross-referencing the performance with the pricing and then running a comparison. 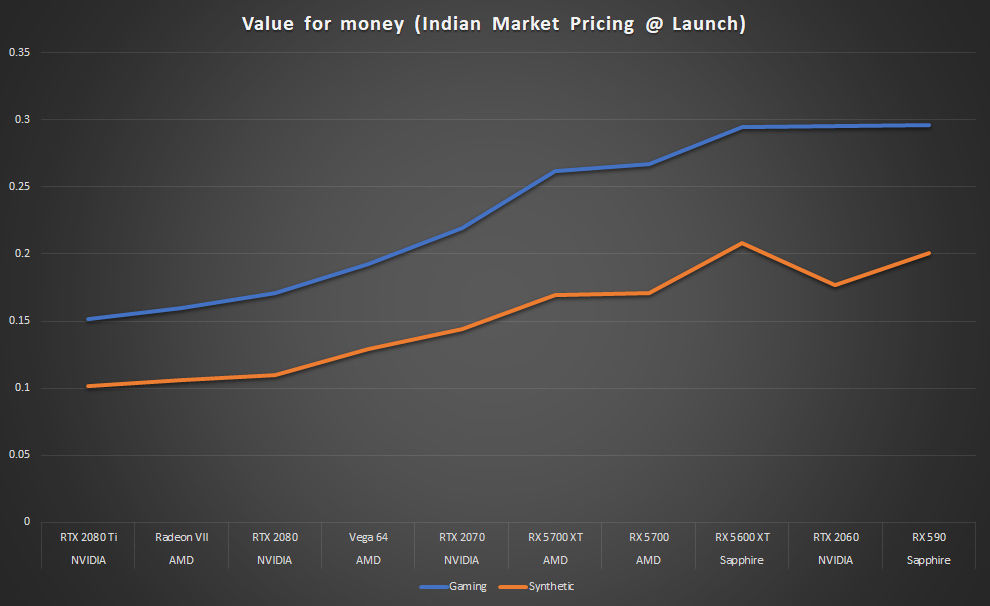 To do this we averaged out the synthetic performance and gaming performance separately and then pegged it against the current actual market price. In the graph above, the blue line indicates value for money if you’re looking at gaming and the orange line indicates value for money on the basis of synthetic benchmarks. The RX 5600 is certainly better than the RTX 2060 at synthetic benchmarks since it scores much higher in quite a few of the standard tests and even in some of the compute benchmarks. However, when it comes to gaming, the RTX 2060 is still ahead because it’s priced lower and the FPS delta isn’t large enough to warrant the price premium that the RX 5600 XT commands. We haven’t even factored in the fact that the NVIDIA RTX cards have support for hardware-accelerated ray-tracing owing to the few titles that actually support it. Regardless of that, a newly launched card just equalling a 1.5 year-old card isn’t that great. That too, only the souped up versions can do this, the RX 5600 XT cards which aren’t rated for 14 Gbps memory will perform much lower and then the RTX 2060 still comes out on top. In fact, India is one of the rare odd markets where the RX 5600 XT (launch price US$279) costs more than the RTX 2060 (current price US$299). This absurd pricing will effectively prevent wide-scale adoption in the country.

AMD’s drivers are still a bit finicky. While we did experience several crashes with the review drivers and that’s expected since tweaking is always an ongoing process, we were surprised to see the public launch day drivers crashing as well. 3DMark Time Spy Extreme crashed quite frequently and we experienced several crashes while running our game benchmarks as well. This is discounting the benchmark runs while the card was overclocked.

The Sapphire Radeon RX 5600 XT is no doubt one of the only RX 5600 XT cards you should get since it features better build quality and can handle higher memory clocks. The fact that the RX 5600 XT only equals a 1.5 year old RTX 2060, in terms of value for money, doesn’t help much. This card is a great performer in the mid-range segment for 1080p gaming but AMD really needs to work on its regional pricing for the RX 5600 XT to have a similar impact as it does in western markets. 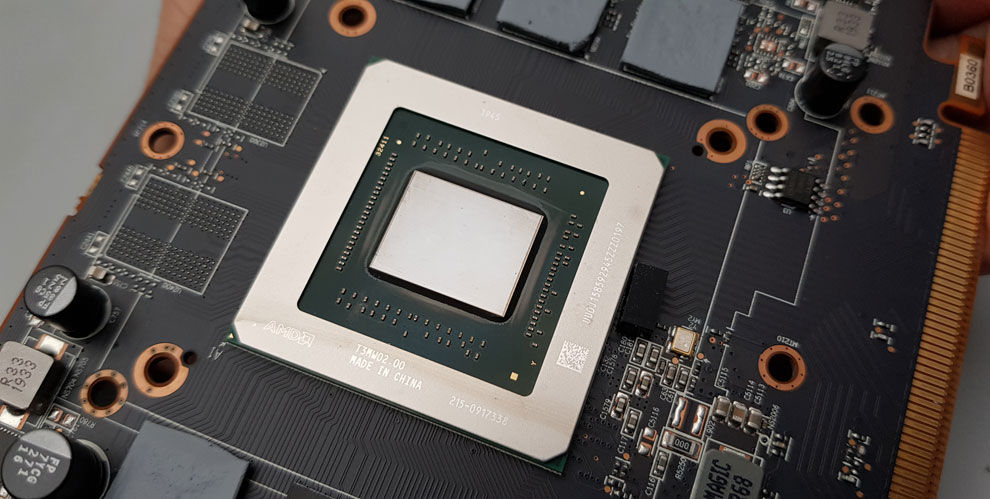