Delivers a mass-appealing sound signature, but lacks some key features 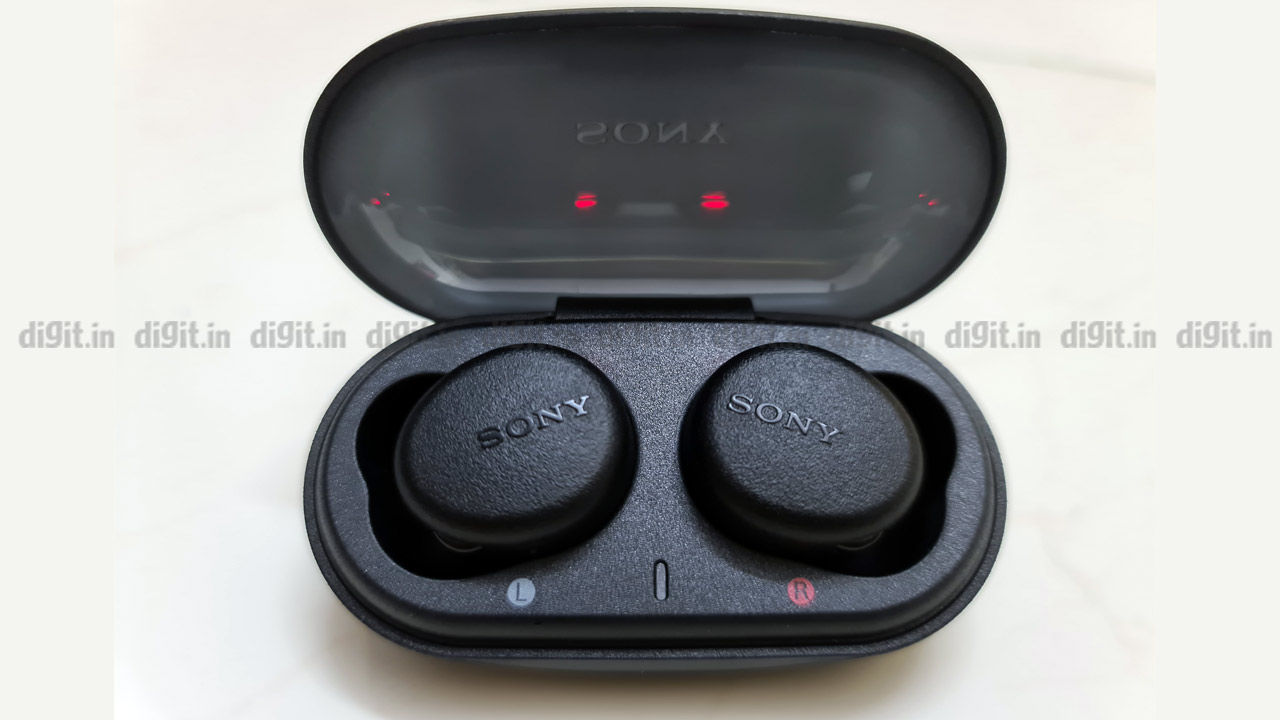 
After being seemingly absent from the exceedingly competitive true wireless audio segment in India, Sony has finally entered the lucrative market with the Sony WF-XB700 ‘Extra Bass’ true wireless earbuds and the Sony WF-SP800N Noise-Cancelling true wireless sports earphones. The former is Sony’s mass-market product, priced at Rs 9,990 and that is the one we will be reviewing. For a company as distinguished as Sony in the audio industry, these true wireless earphones are pretty conservatively priced. Still, spending close to 10K for a true wireless pair of earphones calls is a tall order for most Indians, especially since the Indian audio market is chock full of brands such as Noise, Wings, and more that offer competitive audio solutions at affordable price points. So, the question that stands is if Sony has done enough with their new relatively affordable entrant in the true wireless segment? Let’s find out.

Sony has opted for a ‘Tri-hold’ design with the Sony WF-XB700 earphones that rest on your ears in three different spots, creating a more ergonomic fit. The earphones have an odd shape with rounded, oblong earbuds that stick out of the ear considerably. The oval panel that juts out resembles a UFO which slims down slightly to connect to yet another oval disk, that houses the drivers, and this finally condenses down to the earbuds tips. 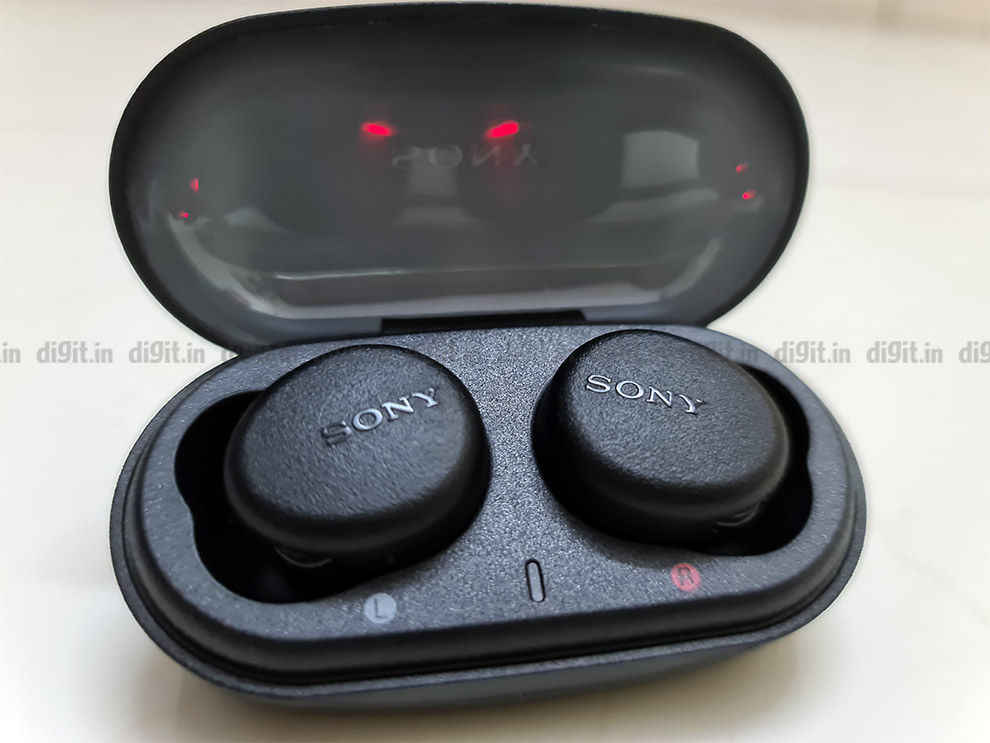 The outermost disc or panel has an eggshell-like textured feel while the inner side has a glossy texture. The tips, on the other hand, have a simple matte texture. While the earbuds are definitely on the larger side of the true wireless earbuds spectrum, they are ridiculously lightweight for their form factor, making them comfortable to wear over extended listening sessions. This is truly a testament to Sony’s design team since the earphones actually host sizable 12mm Neodymium drivers and have a massive battery life of 9 hours on the buds themselves. 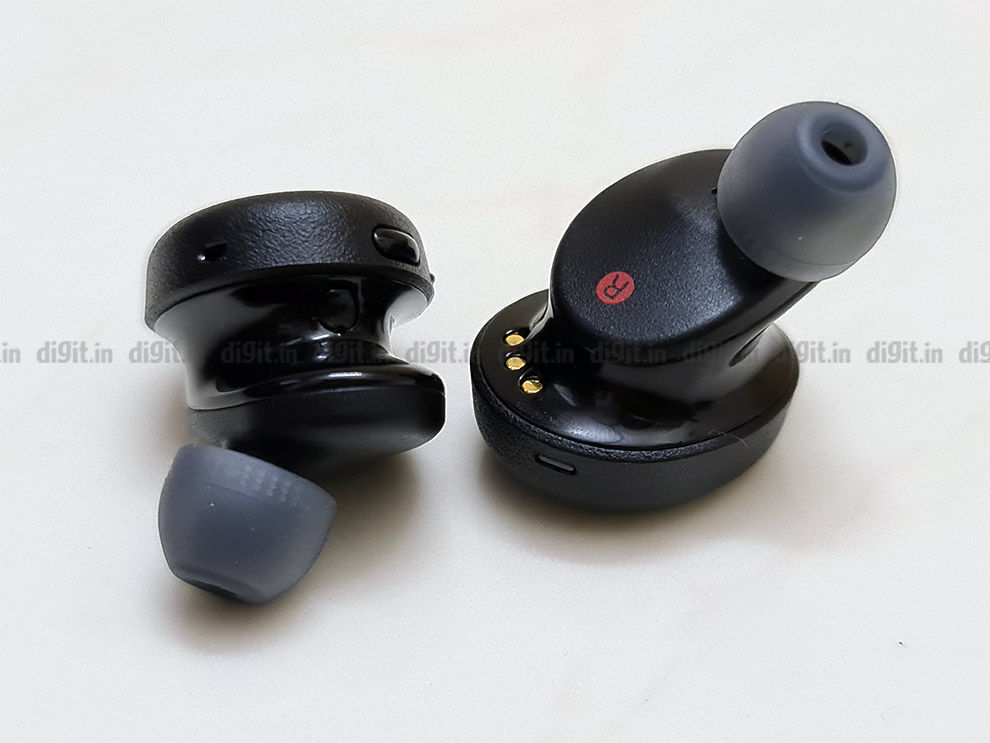 However, due to a major portion of the earbuds sticking out of the ear, these tend to feel a bit flimsy despite the seemingly secure fit. Sony provides a total of five silicone ear tips sizes for users to choose from (XS, S, M, L and XL), which pretty much ensures that most users will find the perfect fit corresponding to the size of their ear canal. Despite finding the perfect fit for our ears, running with these earbuds made us feel a bit insecure about the fit causing us to adjust them every few minutes. Either way, Sony doesn’t advertise these as Sports earphones and if you’re merely sitting down or walking around and listening to music, these should feel adequately secure and snug within your ears. 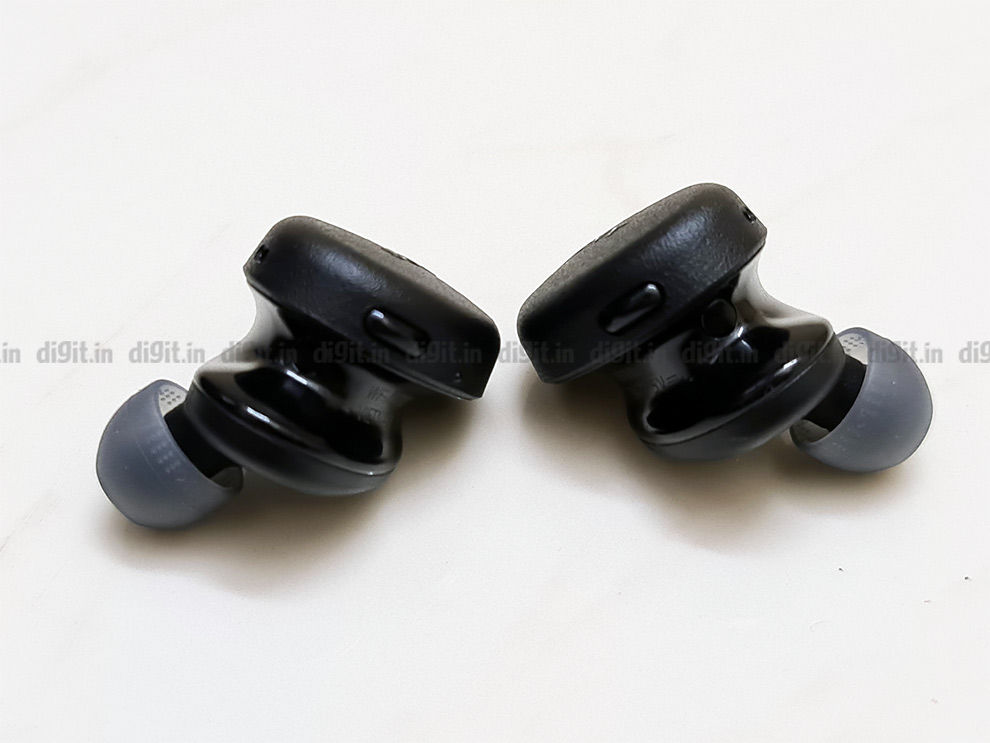 Each earbud features a media control button lying on the underside of the panel that sticks outside your ear. We were hugely appreciative of the fact that Sony chose not to put their physical buttons on the surface of the panel since pushing such buttons can cause the earphones to dig inside the ear. With the buttons on the underside of the bud, you can easily push them down without any overbearing discomfort. The buttons are appropriately raised over the earbud’s surface, so you can easily feel and find them and they are quite tactile as well. 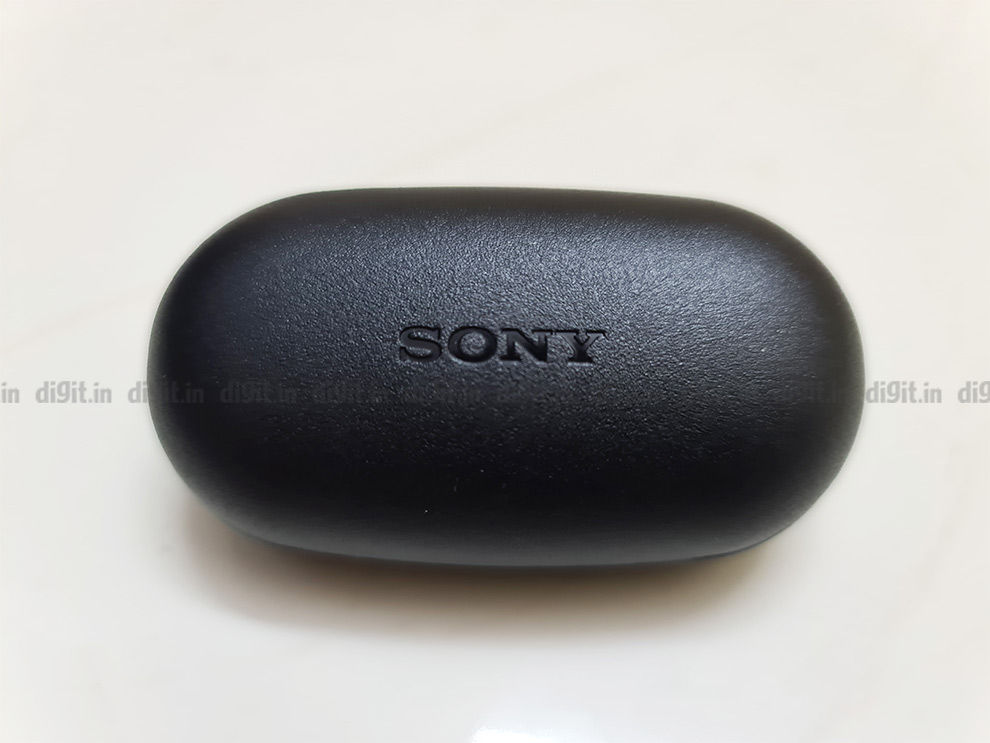 Coming to the charging case of the Sony WF-XB700, it is a relatively compact plastic charging case that features a translucent cover. This lets users check the charging status of the earbuds through the lid since the LED light shines through. The charging case has an eggshell-like textured feel similar to the outer panel of the buds. This material, on both the charging case and the buds, feels plasticky and rather cheap. The case also features a USB Type-C charging port on the backside. The magnets within the case are extremely strong and ensure that the buds sit in there securely. 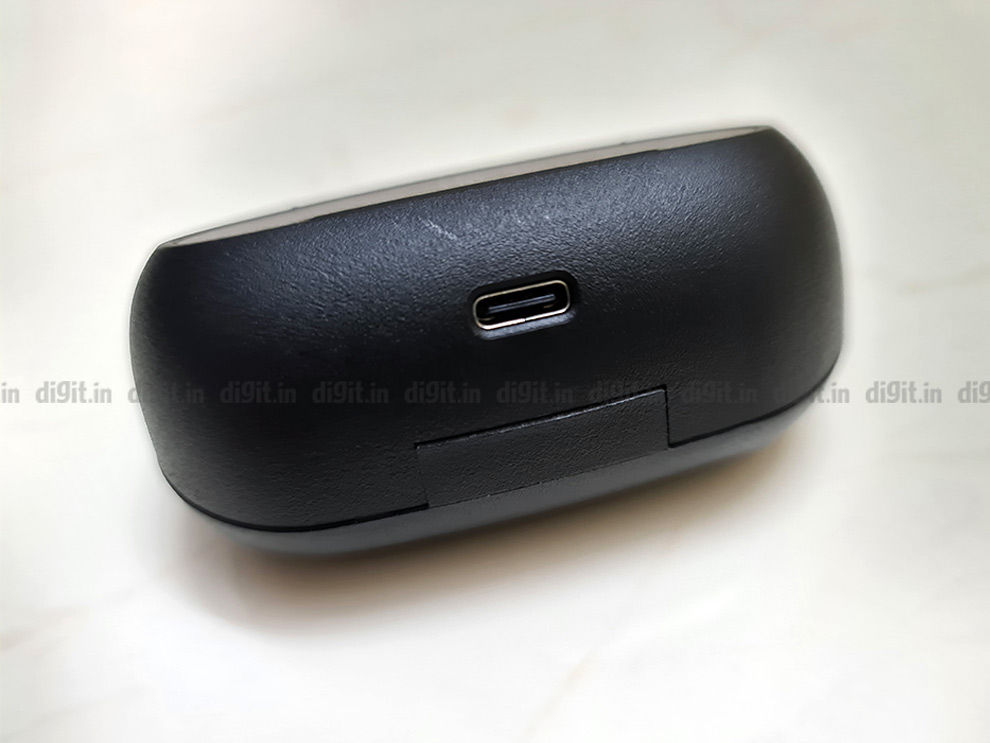 Overall, the slightly odd, three-tiered design of the buds may be polarising to some users and the plasticky feel of the buds and the case can be disappointing too. Still, the earbuds are comfortable in the ear and do not cause ear fatigue even after hours of wearing them. They’re secure and snug in the ears, however, they can feel a tad flimsy when jogging or running due to their large form factor. The charging case is quite portable, but it isn’t as compact as the likes of the Samsung Galaxy Buds Plus and the Jabra Elite 75t.

The Sony WF-XB700 is Sony’s mass-market true wireless model, so it lacks some of the premium features such as Active Noise Cancellation, Transparency Mode and wireless charging on the case. However, it also lacks a few other features which are sometimes found on affordable true wireless earphones below 10K or even 5K at times. The features we sorely missed were touch controls, auto-pause, app support for EQ adjustments, and the aptX audio codec which allows for HD audio. Seeing that Sony already has a pretty powerful app for headphones that allows granular control over their audio devices, it is strange to see that the WF-XB700 can’t be used with the app. 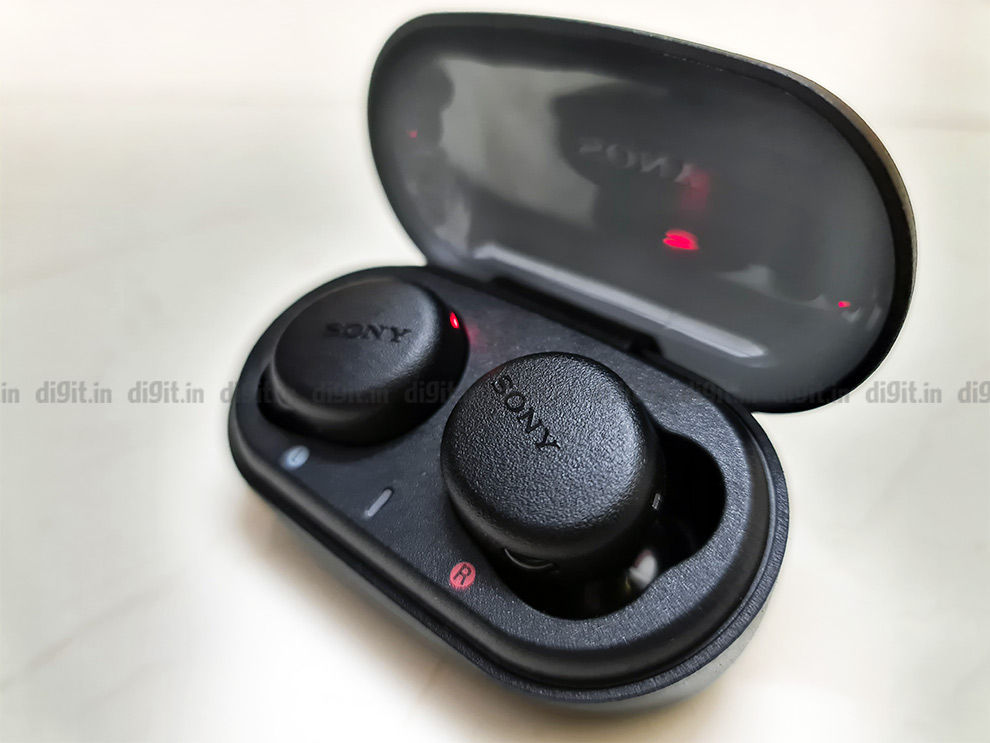 In place of touch controls on the outside of the earbuds, Sony has included one physical button on each earbud at the bottom edge of the outer panel. The button on the left earbud controls the volume, while the right one can play/pause tracks, answer/decline calls, seek tracks, and summon your device’s voice assistant. Even though these aren’t the state-of-the-art touch controls present on devices such as the Samsung Galaxy Buds Plus or the Sennheiser Momentum True Wireless 2, they are extremely reliable, respond well to clicks, and are tactile as well. Double and triple clicks that can be aggravating on touch earbuds registered with absolutely no hiccups on these.

The earbuds come equipped with IPX4 sweat and water-resistant rating as well, which means they can shrug off light splashes and sweat. Although they lack the aptX audio codec, they do come with AAC which is useful for both Android and iOS devices and does offer slightly better quality than standard SBC. They are powered by Bluetooth v5.0 and come with an effective wireless range of up to 10m or 33 feet, barring any obstacles. The Bluetooth connectivity was pretty solid for the most part and the wireless connection stayed put even when we put a wall between the earphones and the smartphone, which is commendable. 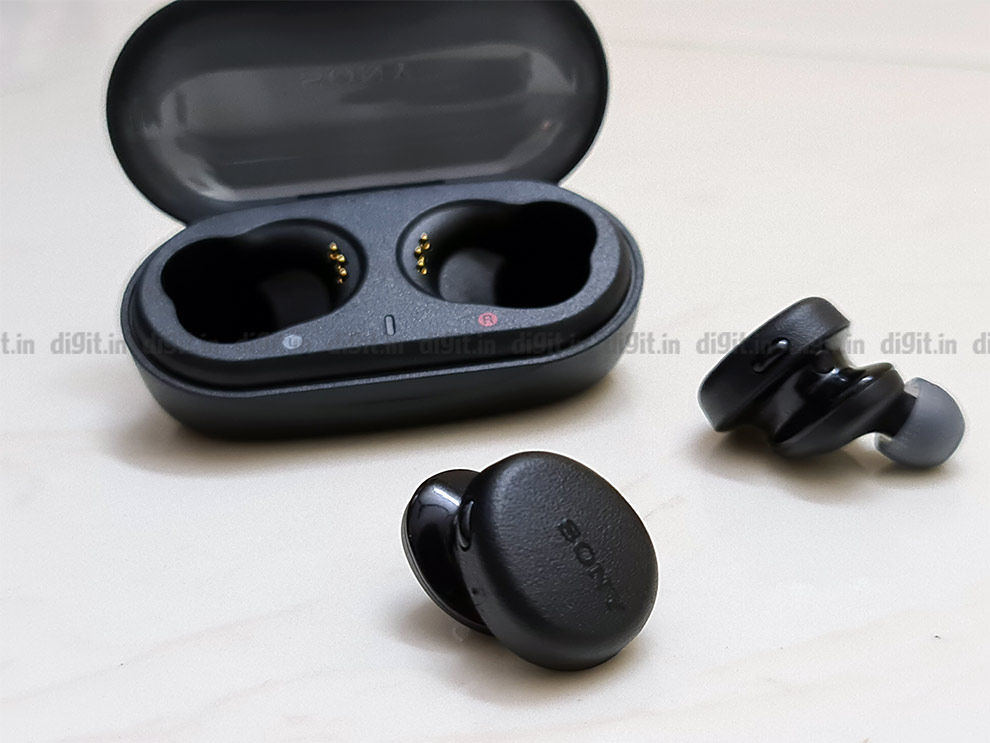 Packing sizable 12mm Neodymium drivers with a frequency response of 20 Hz to 20,000 Hz, the Sony WF-XB700 delivers powerful and bass-forward sonic performance out of the box. Staying true to their ‘XB’ (Extra Bass) moniker, the earphones unabashedly highlights the bass response in favour of other frequencies. We were worried that the exaggerated bass response would end up sounding muddy and unpleasant. Fortunately, that was not the case at all. While it obviously doesn’t have the range and dimensionality of premium true wireless earphones, it certainly keeps the lows and bass clean, crisp and punchy. Pop, rap and EDM tracks sound energetic and thumpy, and the bass response should more than satisfy even the staunchest bass-lovers. In bad guy by Billie Eilish, the beats strike thunderously while still straying away from being overly muddy. 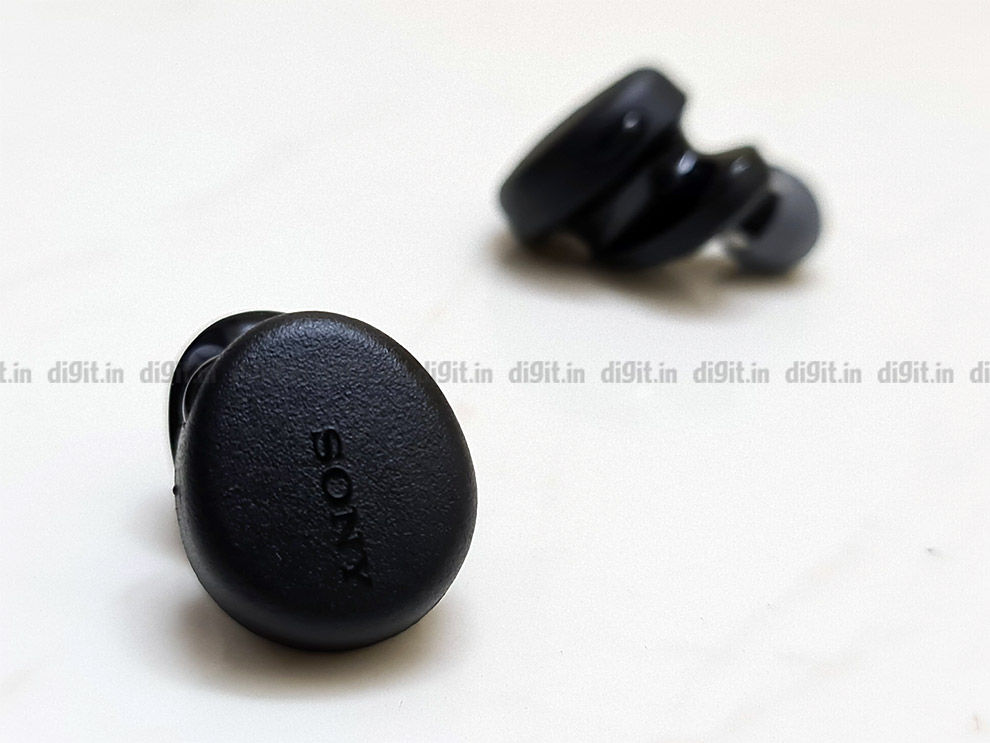 The mids, unfortunately, do suffer due to the bass-forward nature of the earphones. The mids are slightly recessed and even suffer from some auditory masking, especially in the lower-mids frequency range. The highs are also slightly under emphasised, much less so in comparison to the mids. In the track Around the World by Kings of Leon, the vocals sound distant and slightly muffled and the shakers in the background are almost inaudible. Nevertheless, in vocal-centric tracks with minimal bass, they come out beautifully with a silky smooth texture and adequate clarity when not masked by the lows. The soundstage is pretty decent for in-ears and it definitely has a larger sense of space than most other earphones at this price point. The imaging is stellar and the instruments are positioned almost impeccably in the available space. 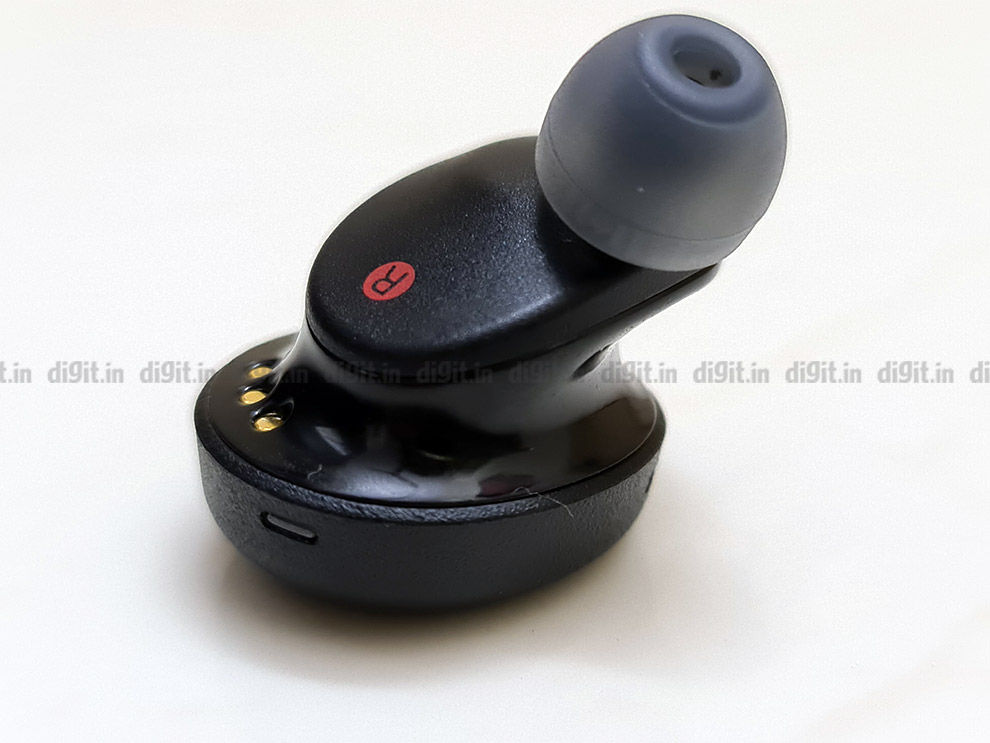 Watching TV series and films with these earphones is a decent experience, however, the dialogues aren’t as enunciated as you’d hope due to the recessed mids. It didn’t bother us too much but we did increase the volume much more when we watched shows in comparison to the volume levels we kept while listening to music. Gaming on these earphones is a good experience, especially if you play a game with explosions and gunshots that ring audibly in the ear. We could even pinpoint footsteps and gunshots with a commendable level of precision due to the stellar imaging.

Sony rates the battery life on these earphones to be around 18 hours in total, with 9 hours on the earbuds themselves and another 9 hours on the charging case. The large form factor of the earphones definitely contributes to the sizable battery life of the buds. In our tests, we found that the battery on the buds sometimes even extended past the 9-hour mark. We were comfortably getting around 9-10 hours of juice on a single charge with the buds and the case topped up the earphones one more time as well. The buds take about 2-2.5 hours to charge up back to full, which is pretty speedy as well. Overall, the battery of the WF-XB700 truly impressed us, especially the battery life on the buds. 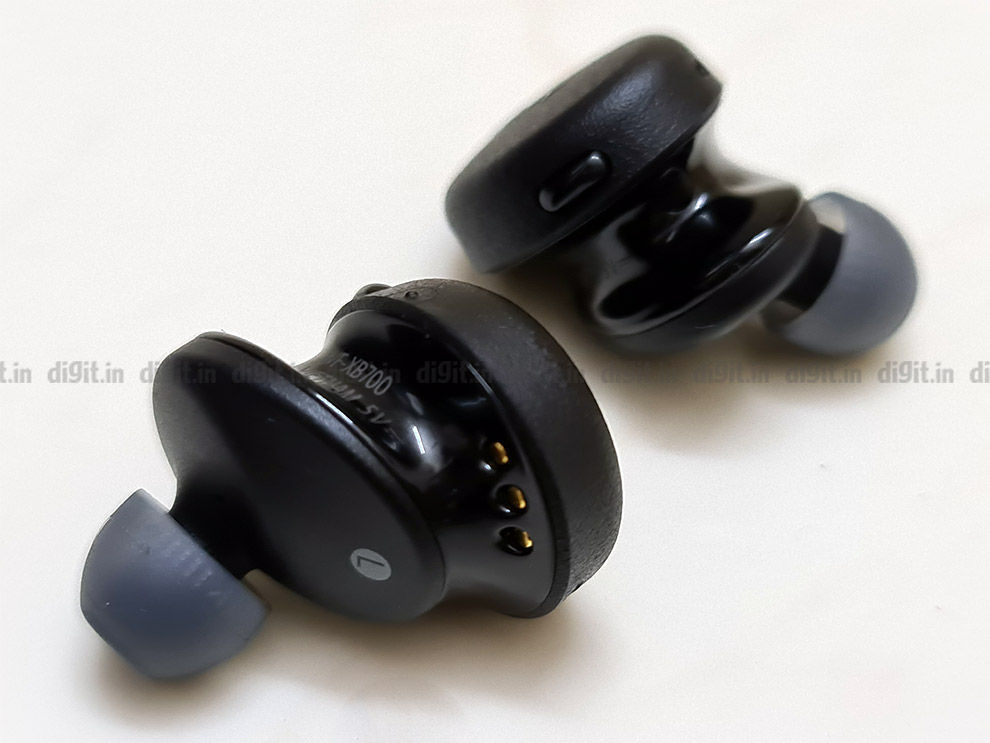 Coming to the microphone quality, the Sony WF-XB700 provided us with crystal clear calling and recording experience. The receiver on the other end of the call pointed out that we sounded clearer than usual on the call when using these earphones. The calls are distortion-free and the voice doesn’t sound muffled or distant in any manner. Additionally, when we dictated a paragraph in our Notes app using voice, the microphone was able to accurately pick up everything we said.

Priced at Rs 9,990, the Sony WF-XB700 Extra Bass true wireless earphones are quite a compelling purchase, especially for those who enjoy a bass-forward sound profile. Nevertheless, they do miss out on features such as ANC, touch controls, and EQ customisation. While we don’t expect Sony to add ANC to a sub-10K pair of earphones, touch controls and app support was something we sorely missed at this price point. Nevertheless, the earphones offer a rich and warm sound profile that will sound decent with many genres of music, they have extremely reliable playback controls, solid battery life and also have a snug and comfortable fit. Overall, if you prefer a bass-forward sound profile and don’t care too much about touch controls and EQ customisation, these earphones could be a good purchase. However, if you do want ANC and other premium features, consider extending your budget and going for the AirPods Pro, or maybe even the other Sony true wireless offering – the Sony WF-SP800N.