Balanced sound and budget-friendly, but not perfect 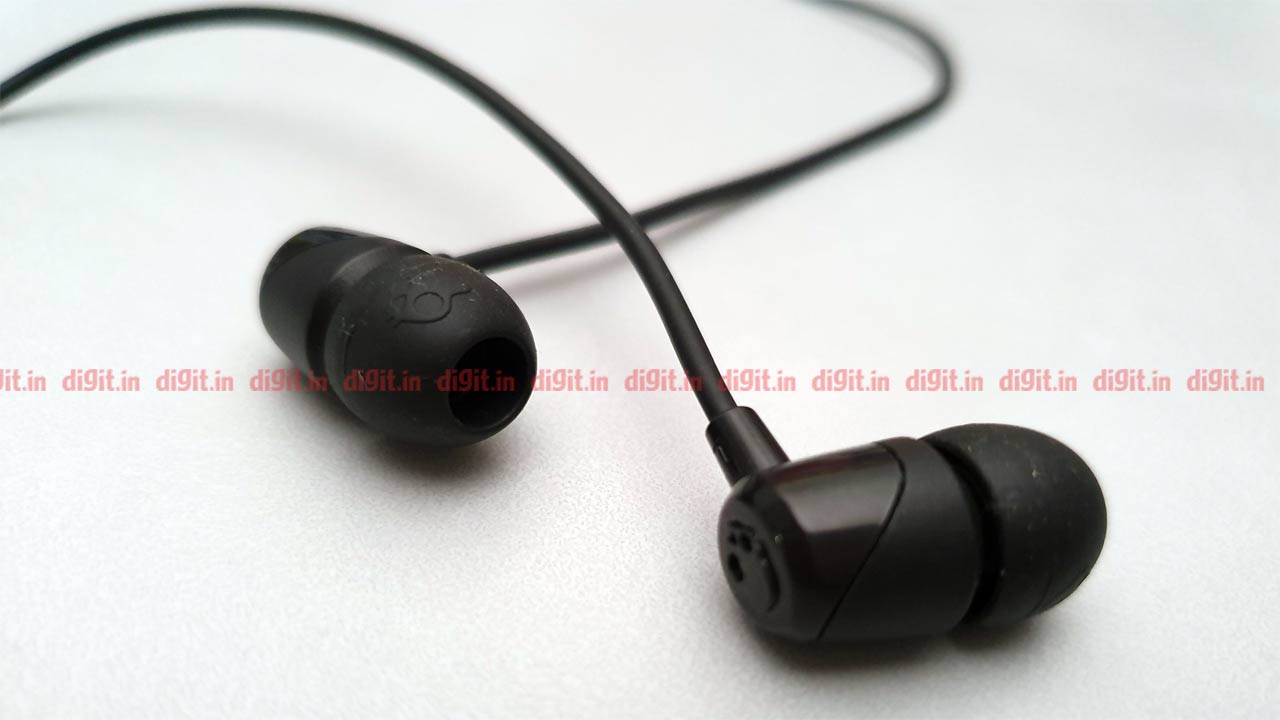 
Skullcandy has carved a name for itself in the audio industry as a brand that caters to people looking for affordable audio solutions. The company has overhauled its Jib Wireless earphones with their newest offering – the Skullcandy Jib+ Wireless earphones – and the upgrades feature the addition of a few quality-of-life features as well as the coveted splash resistance feature, which works like a charm. Priced conservatively at Rs 2,499 and discounted to Rs 1,990 on Amazon, the wireless earphones definitely fit snugly in the budget wireless earphones category. Let’s delve deeper into whether the earphones stand up to our test or if they have compromised on quality to achieve the elusive, under Rs 2,000 price point.

We were pleasantly surprised by the sound quality the Skullcandy Jib+ Wireless earphones boast, especially at this price point. Skullcandy has packed decently-sized 9mm drivers in each earbud, and the results are quite prominent. The earphones have an uncommon amalgamation of boosted bass as well as treble. The latter, at times, does minutely overpower the bass though. In War by Poets of the Fall, you will notice that the bass guitar does seem a tad bit muted once the more treble-sounding instruments creep their way into the track. However, at no point does the sound become tinny or unpleasant, which is surprising.

The bass, in most cases, is deep, powerful and quite consistent, the mid-range and treble are balanced as well which translates well in genres such as rock, pop, and especially electronic. However, classical music, such as Beethoven’s Symphony No. 5, isn’t reproduced as accurately as one would desire.

Vocals are quite clear in tracks such as Hello by Adele, which are specifically crafted to let the vocals soar, however, in tracks such as Pull Me Under by Dream Theatre, they can suffer a tad bit due to the array of instruments present in the song, therefore layering and separation doesn’t seem like something the Jib+ do elegantly, but we’re just being nitpicky at this point. Highs appear to be sculpted in most tracks, however, we were able to pick up slight distortions while listening to Fall Out Boy’s Centuries at 100 per cent volume only. When we turned down the volume to the usual 60 per cent, there was absolutely no discernible distortion in the same track.

We found that the frequency response consistency is also great, especially if the user arrives at the perfect fit and an air-tight seal. The stereo sound of these headphones is also quite decent since we could get accurate placement and localisation of instruments and vocals. This indicates the left and right drivers are well-matched. Unfortunately, the soundstage on the Jib+ leaves something to be desired, as is the case with a lot of budget wireless in-ears.

Passive isolation is quite lacking here, especially in the bass range. You can definitely hear background sound in noisy office environments, or vehicles during commute unless you’ve turned up the volume considerably. However, Skullcandy has impressed us again since sound leakage is extremely minimum on the earphones even on high volumes of 70-80 per cent.

Performance-wise, the Jib+ does tick many boxes of a good pair of budget wireless earphones. Unfortunately, we found that the call quality is sorely lacking on these earphones. The microphone seems to be inefficient since the person on the other end could only hear the reviewer’s voice if the module containing the mic was brought close to the mouth. Our voice also sounded muffled or even gargled at times, which is not ideal.

One of the foremost complaints about the Skullcandy Jib Wireless earphones was their build quality and how the thin audio cables didn’t exactly scream “durable”. While the Skullcandy Jib+ retains the ultra-thin TPE audio cables as connectors to earbuds, the portion between the two pill-shaped modules is reinforced by flat TPE cables which seem much more sturdy. This cable acts like a neck-style band and ensures lesser tangles. 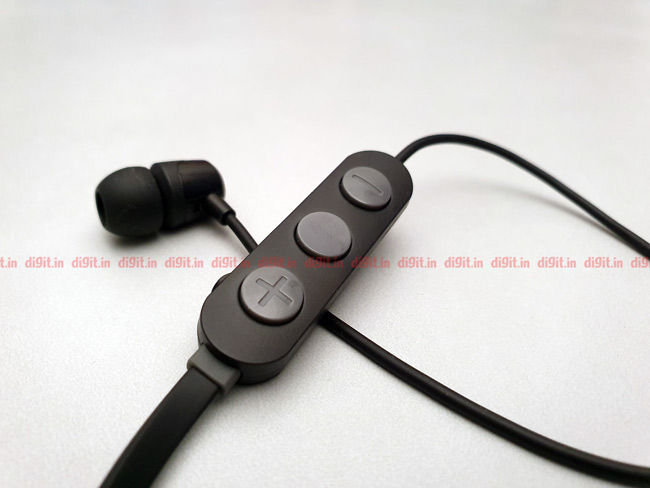 There are two bulky modules present on the earphones. The left-side module houses three circular buttons – the pause/play button in the middle has a slight indent and also doubles up as the button to answer phone calls or power on/off the device, the left button increases the volume or skips tracks while the right one does the opposite. You’ll also find an LED light on this module which blinks every time the earphones are turned on/off and when they are in pairing mode. Additionally, there’s also a micro-USB port tucked neatly under the hood of a rubberised flap which houses a little groove to allow users to easily pull the flap off. This flap is present since the earphones are splash resistant.

The other module on the right side is more of an added weight to stabilise the earphones around your neck and houses the Skullcandy logo sitting flush on the left side of the pill-shaped module. Overall, we wish the modules were more compact since they end up looking quite bulky and ruin the simple, minimalist matte-black aesthetic Skullcandy has gone for with these. Nevertheless, the earphones are still exceptionally lightweight despite the oversized modules. 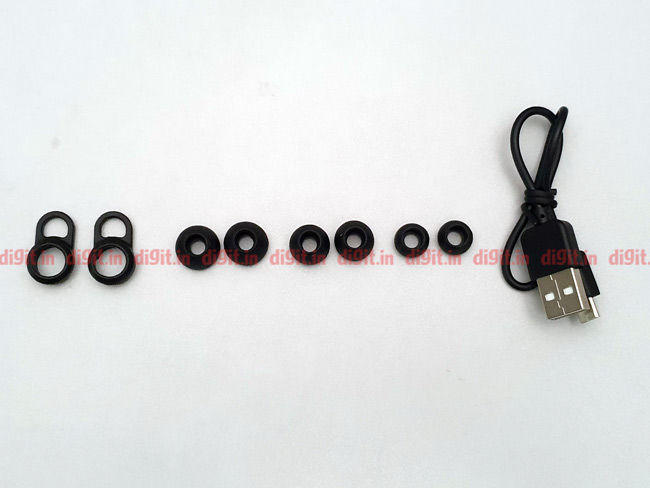 The earbuds present on the Skullcandy Jib+ are quite standard-looking, however, they do feature a dual matte-black and glossy-black accent which makes them pop slightly more. The Skullcandy logo again sits comfortably on the back of each earbud. The company has included three sizes of ear tips – S, M and L as well as a pair of stability gels for additional comfort and security. We found that the Medium-sized tips without the stability gels provided us with the best fit. The stability gels were extremely uncomfortable for the reviewer and as soon as they were removed the sound quality was amped up a couple of notches. We encourage you to take some time and find the best fit for you since this will essentially dictate how the earphones end up sounding to you.

Once you figure out the perfect fit for you, the earphones are decently stable in-ear, however, the bulky modules do bounce around if they aren’t tucked under your shirt. This tends to pull on the earbuds a bit making them slightly less stable than other wireless in-ears that feature a similar design. Despite this, we did use them during commute and brisk walking and they seemed to stay put for the most part.

If you’re someone who’s constantly on the go, be it travel or commute, chances are you’d really appreciate a pair of earphones with splash resistance. Especially, if they cost as little as the Skullcandy Jib+ do. While we do have some extremely capable earphones such as the Sony  MDR-XB80BS Extra Bass, Plantronics BackBeat Fit and Jabra Elite Active 65t, they are exorbitantly priced in comparison to the Skullcandy Jib+. Note: Keep in mind that the Skullcandy Jib+ do not have any specified IP rating, they’re splash-resistant only.

We tested out the Skullcandy Jib+ for its splash resistance feature and it fared extremely well since they worked perfectly fine even after being soaked in the heavy showers Mumbai received over the past few weeks. Skullcandy hasn’t exactly detailed how they achieved their splash resistance, but we figure that the earbuds have some sort of nano-coating over them. Additionally, the flap over the charging port also wards off moisture, so make sure to keep this flap shut when you’re taking them out for a spin.

Connectivity is pretty satisfactory as well. Skips and lags in audio tracks are rare since the earphones feature Bluetooth 5.0 and the wireless range, rated at 35 feet, seemed to hold up as well. The earphones lost connectivity only at a sizeable distance. It even remained connected with a wall in the middle, which is decent. Unfortunately, the same cannot be attested when it comes to consuming media content since the earphones displayed a below-average latency and the disparity between the audio and video was quite perceptible.

The earphones feature micro-USB charging, as mentioned above, which is standard for a pair of budget wireless earphones. The 6-hour battery life is decent and the company claim held up quite well in our tests since we were able to extract round about 6 and a half hours worth of battery life from the earphones. There are no power-saving features such as anti-power off, so ensure that you turn the earphones off once you are done using them. 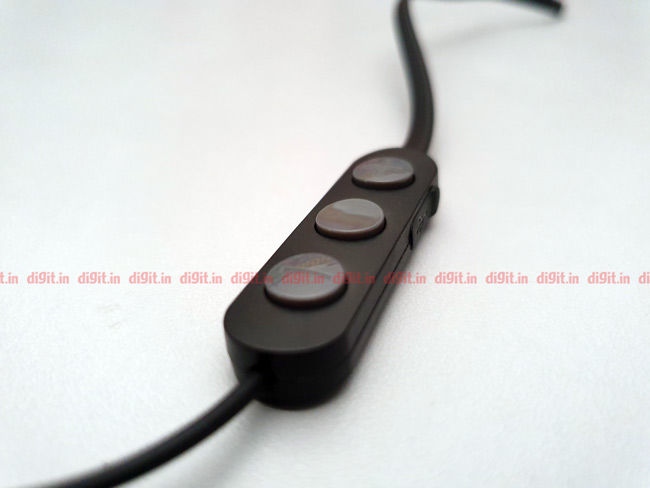 Last, but definitely not the least, we’ve arrived on a major qualm we have with this device. Skullcandy claims that the Jib+ has Voice Assistant support and has marketed it as one of the major features of the earphones, and one of the upgrades from the original Jib Wireless earphones. However, we found that there is no actual way to access the voice assistant on your smartphone directly from the Jib+, which means the device doesn’t actually have voice assistant support… Let us explain further. There is no dedicated button on the earphones to fire up your voice assistant, so naturally, we assumed that there must be some sort of button combination to get access to the assistant.

And that was the beginning of a two-hour-long process which caused the reviewer to almost pull her hair out at one point. We looked at the user manual (something we don’t usually indulge in because we enjoy figuring things out), and we found a set of instructions to access pairing mode (press middle button for 5 seconds), skip tracks (press + button twice) and more. However, there was absolutely no mention of how to access the voice assistant, which aggravated us even more. We tried an amalgamation of combinations to get access to the marketed feature. Alas, we had no such luck. At last, we just tried saying “Ok Google” and the assistant fired up immediately. We thought we had arrived upon the solution finally through all our trials and tribulations, however, it turns out that it was our phone microphone that picked up the “Ok Google” command and not the earphones since it refused to work when we went a couple of steps away from our test phone. Skullcandy really dropped the bomb here, by advertising something so prominently that is not present at all.

The Skullcandy Jib+ Wireless earphones are quite a decent buy at Rs 1,990, especially for the competent sound quality and splash resistance. You get balanced mids and highs, as well as a good bass push which makes tracks across various genres sound great. Looks-wise, Skullcandy has kept it clean and minimalistic, except for the bulky modules which could have been made a tad bit smaller since they do act as deterrents in the fluidity of the look. Passive isolation and call quality are unimpressive and the absence of the advertised voice assistant feature is extremely disappointing. However, if you are able to get past these issues, most of which don’t matter too much to an average user who just wants a good pair of earphones to listen to music on, then you have a good pair of wireless earphones that give users access to a balanced sound profile and decent battery life for under Rs 2,000.