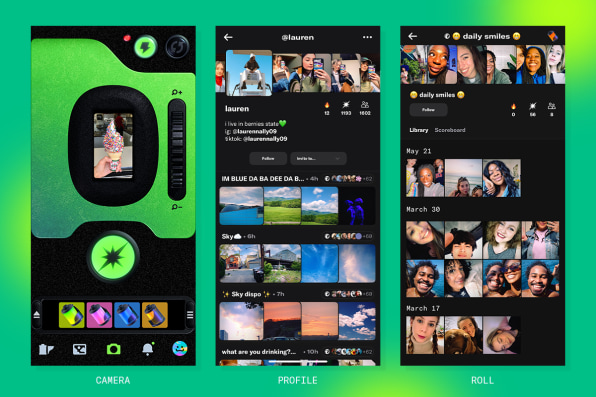 
It’s only been nine months since Dispo rebranded from David’s Disposables. But the vintage-inspired photo sharing app has experienced a whiplash of ups and downs, mostly due to the brand’s original namesake, YouTuber David Dobrik.

Like Clubhouse, Dispo was one of this year’s most hyped up new social apps, requiring an invite from an existing member to join. On March 9, when the company said “goodbye waitlist” and opened the app up to any iOS user, Dispo looked poised to be a worthy competitor to photo-sharing behemoths like Instagram. But, just one week later, Business Insider reported on sexual assault allegations regarding a member of Vlog Squad, a YouTube prank ensemble headed by Dispo co-founder David Dobrik. Dobrik had posted a now-deleted vlog about the night of the alleged assault, joking, “we’re all going to jail” at the end of the video.

It was only after venture capital firm Spark Capital decided to “sever all ties” with Dispo that Dobrik stepped down from the company board. In a statement made to TechCrunch at the time, Dispo said, “Dispo’s team, product, and most importantly — our community — stand for building a diverse, inclusive and empowering world.”

Dispo capitalizes on Gen Z and young millennial nostalgia for a time before digital photography, when we couldn’t take thirty selfies before choosing which one to post. On Dispo, when you take a photo, you have to wait until 9 AM the following day for the image to “develop,” and only then can you view and share it.

In both February and March of this year, the app hit the top ten of the Photo & Video category in the U.S. App Store. Despite the backlash against Dobrik, which resulted in the app’s product page being bombarded with negative comments, the app still hit the top ten in Germany, Japan, and Brazil, according to their press release. Dispo reportedly has not yet expended any international marketing resources.

Now, early investors in Dispo like Spark Capital, Seven Seven Six, and Unshackled have committed to donate any potential profits from their investment in the app to organizations working with survivors of sexual assault. Though Axios reported the app’s $20M Series A funding news in February, Dispo put out a press release this morning confirming the financing event. Though they intend to donate profits from the app, Seven Seven Six and Unshackled Ventures remain listed as investors, but Spark Capital is not. Other notable names involved in the project include high-profile photographers like Annie Leibovitz and Raven B. Varona, who has worked with artists like Beyoncé and Jay-Z. Actresses Cara Delevingne and Sofía Vergara, as well as NBA superstars Kevin Durant and Andre Iguodala, are also involved with the app as investors or advisors.

Dobrik’s role in the company was largely as a marketer – CEO Daniel Liss co-founded the app with Dobrik and has been leading the team since the beginning. After Dobrik’s departure, the Dispo team – which remains under twenty members strong – took a break from communications and product updates on the app. It’s expected that after today’s funding confirmation, the app will continue to roll out updates.

Dispo is quick to shift focus to the work of their team, which they call “some of the most talented, diverse leaders in consumer tech.” With the capital from this funding round, they hope to hire more staff to become more competitive with major social media apps with expansive teams, like Instagram and TikTok, and to experiment with machine learning. They will also likely have some serious marketing to do, now that their attempt at influencer marketing has failed massively.

Now more than ever, Dispo is promoting the app as a mental health benefit, hoping to shift the tide away from manufactured perfectionism toward more authentic social media experiences.

“A new era of start ups must emerge to end the scourge of big tech’s destruction of our political fabric and willful ignorance of its impact on body dysmorphia and mental health,” CEO Daniel Liss writes in a Substack post titled Dispo 2.0. “Imagine a world where Dispo is the social network of choice for every teen and college student in the world. How different a world would that be?”

But, for an app that propelled to success off the fame of a YouTuber with a history of less than savory behavior, that messaging might fall flat.

According to Sensor Tower, the highest Dispo has ever ranked in the Photo & Video category on the U.S. App Store was in January 2020, when it was still called David’s Disposables. The app ranked No. 1 in that category from January 7 to January 9, and on January 8, it reached No. 1 among all free iPhone apps.