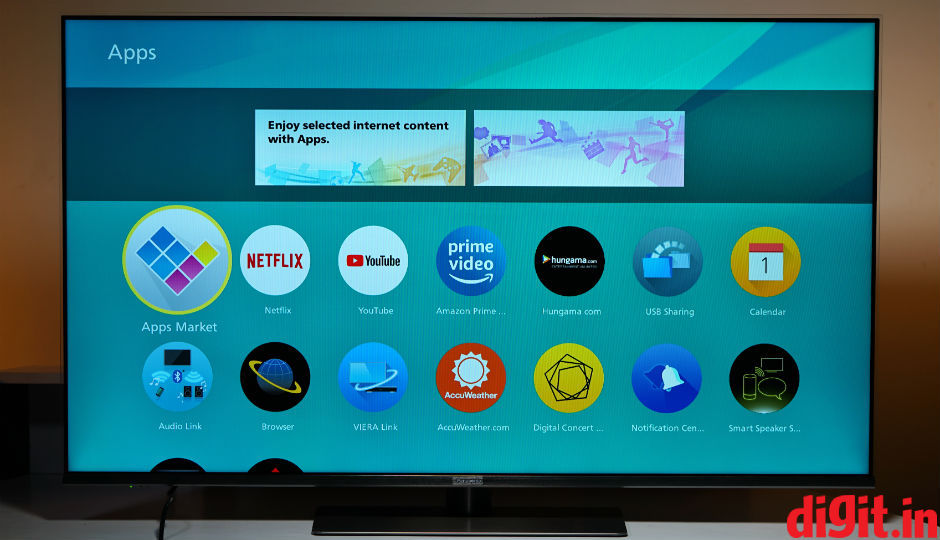 Buying a flagship TV generally means going for an OLED TV but if you are someone that will watch TV in a brightly lit environment or a room with a lot of sunlight, then chances are you will need something that can withstand glare. One of the problems of OLED TVs is that they aren’t the best when viewed in brightly lit rooms due to their extremely reflective panels. This is where flagship LED TV’s come into the picture. They may not have the same deep blacks found on OLED TV’s but the lack of deep blacks is more than made up for when watching content in well-lit rooms. Today we have with us Panasonic’s flagship LED TV – the TH-55FX800D. The TV boasts of some impressive tech under the hood and comes at the same price point as the LG C8 OLED TV. Is it a worthy contender?

Key specifications at a glance

Extremely well built is the first thing that comes to mind when you lay your eyes on the Panasonic TH-55FX800D TV. The stand has some heft to it, being made of metal, but does keep the TV firmly in place despite a small footprint. The panel of the TV has extremely slim bezels and there is a glass border surrounding the TV. Despite the panel of the TV being extremely slim, it does have a bulge at the back which houses all the components and input sources. Without the stand, the TV measures a mere 5.4cm which makes it really thin.

The speakers are located at the bottom of the panel making them down firing speakers. We will talk more about the speakers in our audio section. 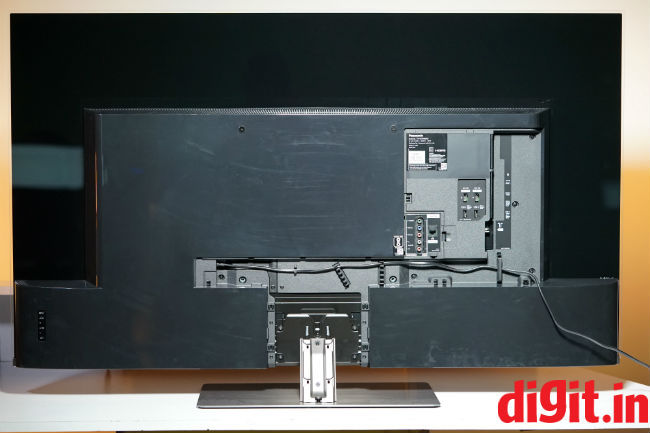 Coming to the connectivity options, ports are distributed between the side and the back of the TV. On the side we have the headphones out, 2 HDMI ports, one of which is ARC, digital audio out, 1 USB port and the antenna port. At the back, the TV has 2 HDMI ports and 2 USB ports along with ethernet, and AV input. A great thing about the connectivity options is that all of them are well hidden behind a panel and there is good cable management to rout your cables. 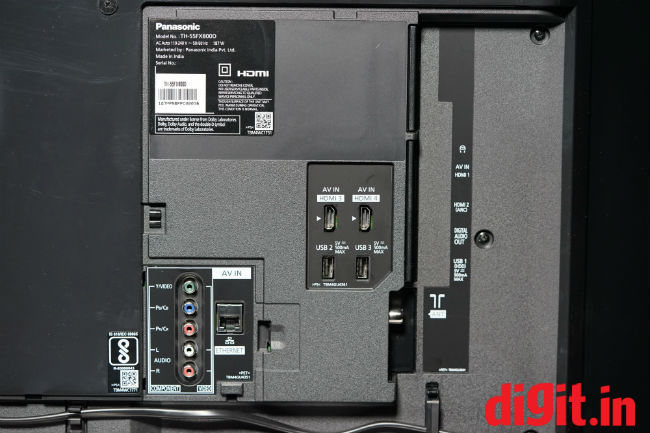 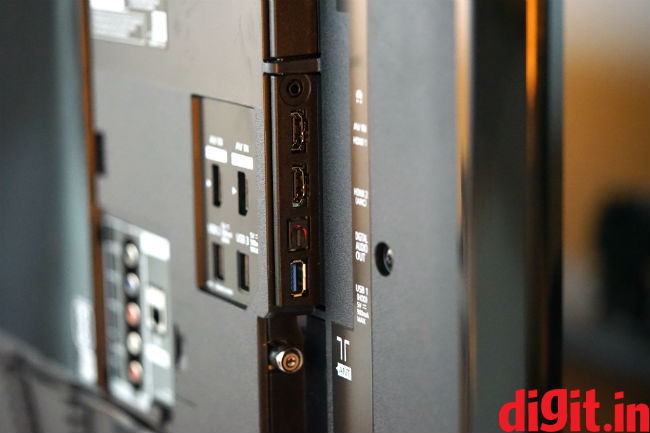 Overall, the build of the TV is absolutely premium, well-constructed and the stand is quite strong. The stand has a small footprint so if you have a small table or entertainment centre, it will fit right in. The TV can, of course, be wall mounted if you like.

The picture quality is the heart and soul of any TV. Everything else is an added feature. Before we elaborate on the picture quality through our various tests, know that the 55-inch Panasonic TH-55FX800D is available for Rs 1,65,000. It is a 4K TV with HDR support but no Dolby Vision support. At the same price, we also have the LG C8 from LG’s 2018 OLED TV (read our review here). So how does the Panasonic TH-55FX800D fair in our tests? 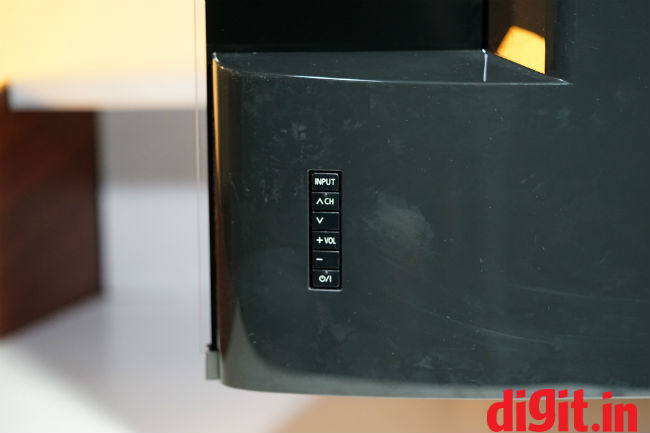 The TV has a built-in Netflix app and supports content plays back in 4K HDR. We played our standard slew of tests from Daredevil, Star Trek, House on Haunted Hill and more to 1080p content like John Wick. The 4k content on the TV looks really good and the picture presets change based on the content you are consuming. Going into the picture settings you will realize that the backlight is automatically set to full when watching HDR content, otherwise, it is at about 50 percent in the Normal preset. It of course changes when you change the presets to vivid and things like that. Since these presets are better suited for 1080p content, we will elaborate on them in the coming sections. 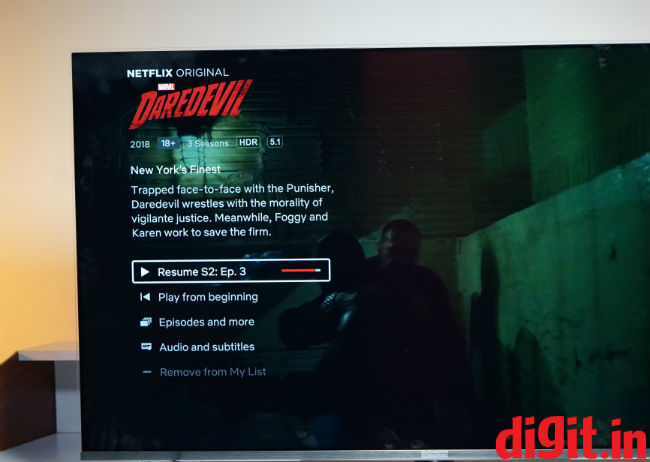 Speaking of the quality of output, it is quite bright. Now one inherent disadvantage of LED TVs over OLED TVs is that blacks aren’t as deep. That isn’t the case here most of the time. The black levels of the TV are fairly good especially when you consider that this is an LED backlit LCD TV. The only downside and you will notice this more when you are watching content in a dark room is that there is some light bleeding at the bottom of the TV more so in the bottom right corner. This is especially visible when you are watching content when content is black around the corners but bright in the centre. For example, a burning sun in space in the middle of the screen. For most this is like that small scratch on your car. As long as you don’t know where it is, you won’t notice it even if you are looking right at it. However, if you know where it is, it will catch your eye every time. 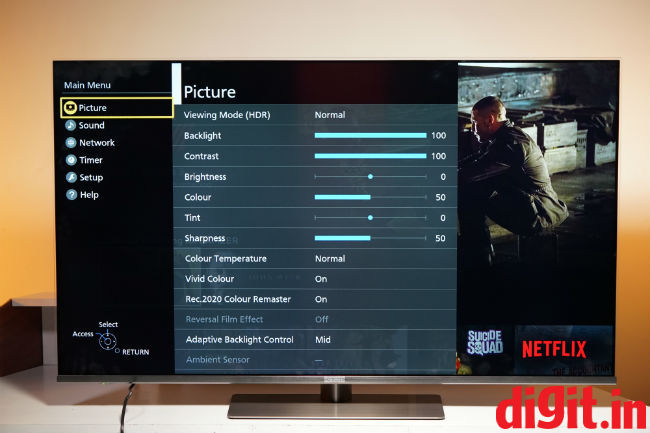 One good thing about the TV is that when watching HDR content, the panel can get really bright and by bright I don’t mean the brightness setting but the backlight. The backlight of the TV is good especially for shows like Daredevil on Netflix and Star Trek Discovery. In some cases, like with the Sony A9F, some Daredevil content looked darker than I’d like and on the Panasonic TH-55FX800D it looks crisp and bright which is good.

Overall, as long as you are consuming 4K HDR content from the built-in apps, you should have a good viewing experience.

This is another space where the TV performs quite well. A lot of content on Prime videos and Netflix is in 1080p and that content looks good on the TV. This is where the other picture presets come into play. We found that keeping the preset to normal but increasing the backlight to about 68 (in a relatively dark room) was the sweet spot for us. We saw content like Wonder Woman, Spiderman on Prime videos and John Wick on Netflix and it looked pretty good. However, there are times when I noticed some blooming especially in John Wick during the Red Circle fight sequence.  Blooming did occur occasionally. 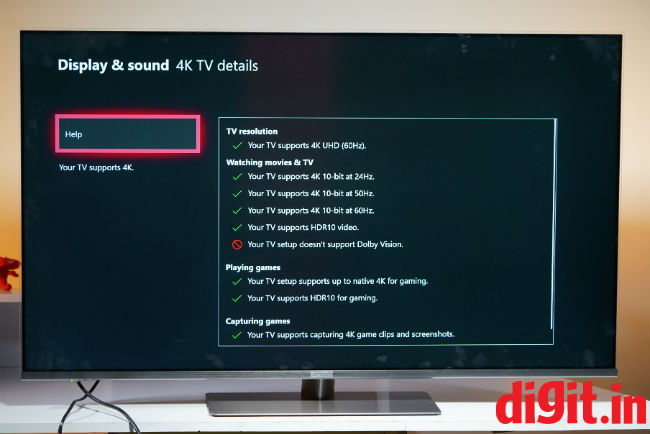 We played our standard suite of test games using an Xbox One X on the TV. These games range from Gears of War 4, Forza Horizon 4, Red Dead Redemption 2 and more. Gaming on this TV looks really good. The ones that offer HDR capabilities look stunning. There is negligible input lag. Once again, in some games where there is night – absolute darkness, you will some light bleeding and blooming but that is only if you play in pitch dark. Have some lights on in the room or have natural light coming into the room and this isn’t as obvious as it is in the darkness. 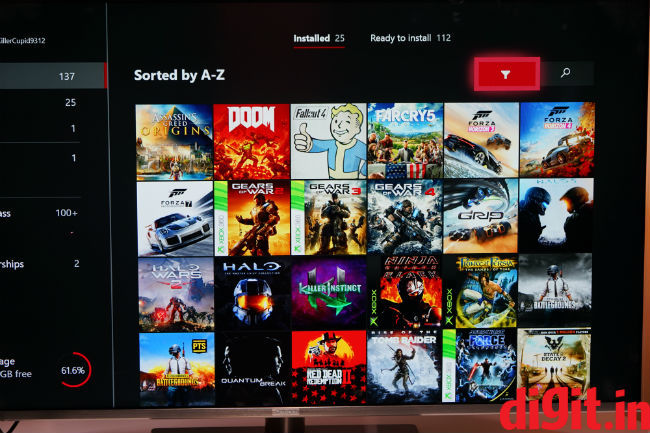 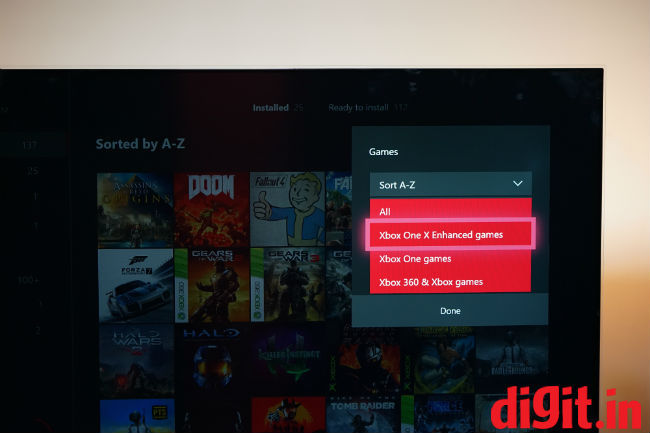 Two 10W speakers may sound disappointing on paper however the only thing disappointing about the speakers on the Panasonic TH-55FX800D TV is the lack of bass. Apart from that the speakers can get loud, clear, especially for dialogues and do a great job when watching shows like Big Bang Theory or Young Sheldon or news on TV. Our standard set of test files which include Cyberpunk 2077 trailer, Blade Runner 2049, and of course, the games. Simply put, to truly enjoy content on the TV it makes sense to invest in a good sound bar or a home theatre. But for everyday TV viewing and the occasional movie or game, you can make do with the TVs speakers. The can cover a large room and at 50-60 % volume, get really loud. 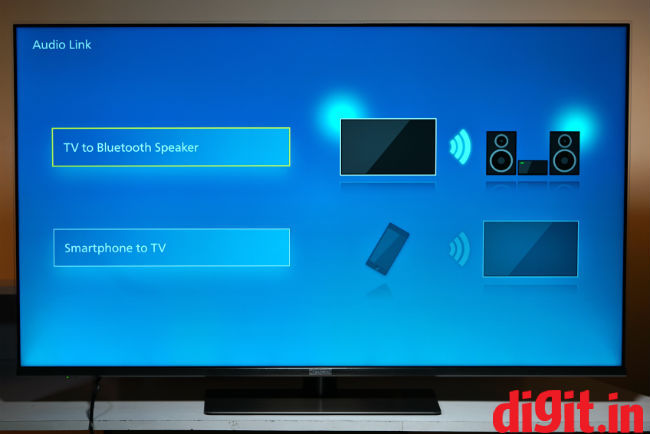 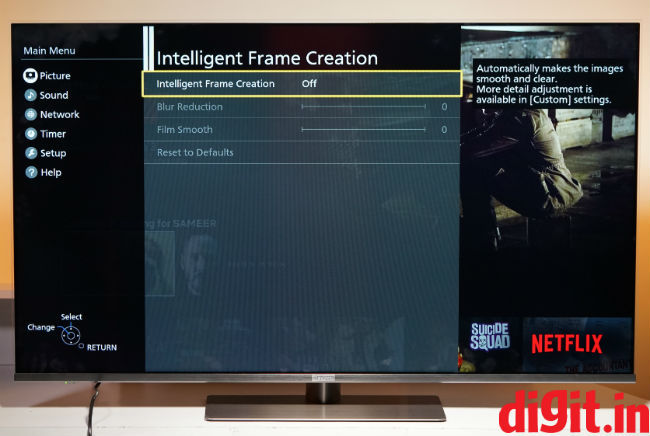 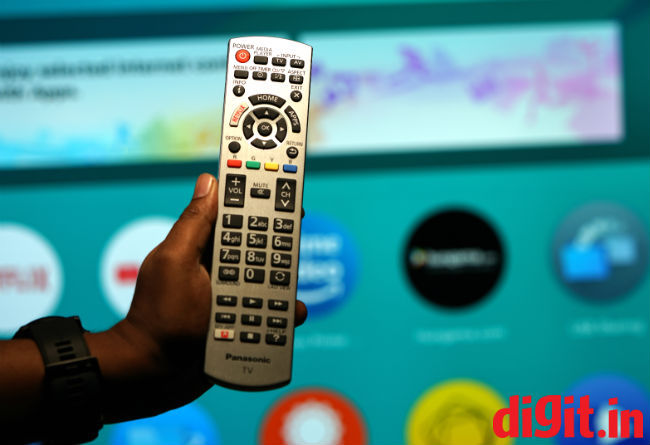 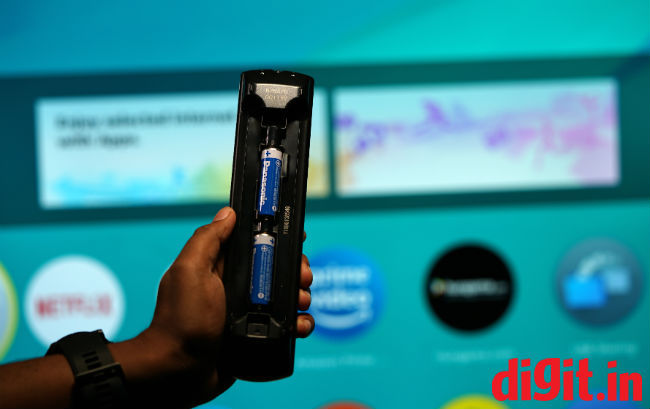 When it comes to the UI of a smart TV, we have seen Android evolve to Android 8 and LG brings Web OS and both the UIs work extremely well for what they offer. Android of course has the advantage of the Google Assistant and Google’s own Play Store and LG has done a good job with voice recognition on Web OS. This is our first outing with Panasonic’s own My Home Screen version 3.0. It is a simple UI with a clean interface where all the apps are listed. You can add your favourite apps as a shortcut if you like and popular apps like Netflix and Prime Videos are here as well. 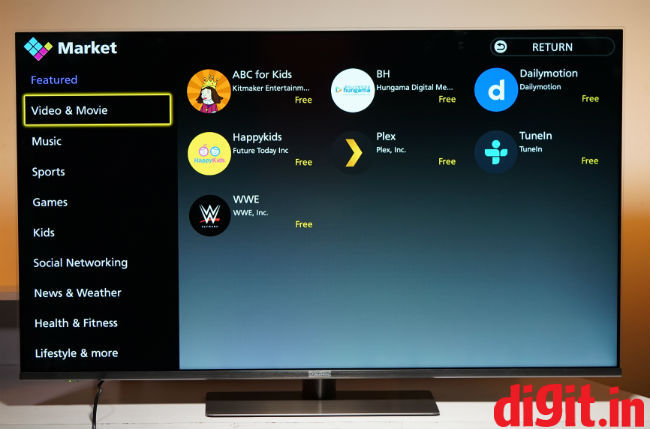 A special mention has to be made of the settings UI of the TV. They present you with all the relevant information like picture presets, brightness, contrast, backlight control and make deep, complex settings easy to access as well. Another thing is that the brightness and backlight controls are separate, which is how it should be. Some TVs label backlight as brightness, which would invariable result in bad calibration of the display’s illumination. It is nice to see Panasonic draw the distinction between the two.

Like we said above, the Panasonic TH-55FX800D TV has an MRP of Rs 2,39,900 but is selling for Rs 1,65,000. It has a very sturdy build, good picture performance, smooth UI and wide viewing angles. However, for the same price you can get a 2018 flagship OLED TV from the house of LG – the LG C8. The LG C8 also has fantastic picture quality and since LG has been in the OLED game for years, they have made the most of the technology. When it comes to picture quality and performance, OLED should be the way to go. However, the Panasonic TH-55FX800D has one use case where it can perform slightly better than an OLED TV – in a brightly lit room. The Panasonic TV has good performance in a bright room or a room that cannot go pitch dark. In pitch darkness however, the LG C8 has better performance.